As the recent game announcements have been multiplying, Mobile is the new frontier for online games and MMOs. The technical constraints have been mostly overcome, and the apparition of a hardcore audience playing mostly from home has made the main problem (good enough ping) less painful. The possibility of free apps with in-app purchases have finally make the business part of it sensible. It’s thus no surprise that many games are announced. However, as games like Pocket Legends find success, the room for growth is increasingly moving, like for social games, to outside of the US/English-speaking territories. What’s the market looking like in Europe?

According to ComScore’s last report Mobile Year in Review 2010 in Europe, the smartphone installed base in the 5 biggest EU countries (Germany, UK, France, Italy, Spain) in Q4 2010 is at 72 million subscribers (15% more than the US). The market is pretty evenly divided between those countries, with Italy and UK at about 23%, and Germany, Spain and France a bit below 20%. Compared to the respective countries populations, it means that Spain with 45 million inhabitants has almost as many smartphone subs than Germany with its 81 million people, and more than France with its 62 million people.

That trend can be seen in the smartphone adoption rates from the same countries, with Spain, Italy and the UK far ahead : 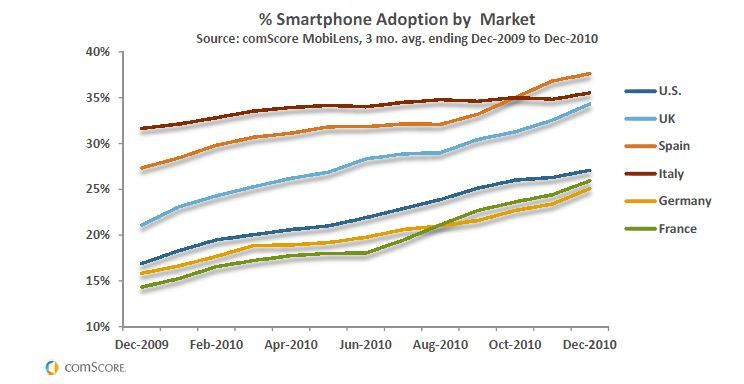 I couldn’t find any data for tablets installed base in Europe. According to IDC, shipments in 2010 have been around 6 millions in EMEA (of which 5 million iPads), and they forecast 22 million shipments in the territory in 2011.

It’s difficult to estimate precisely the market share for mobile OS in Europe, as the last months have seen several contradictory press releases from different sources quoting either iOS far ahead or Android winning all.

From a devices sales point of view, it seems that according both to IDC and Kantar WorldPanel, Android is now ahead in Europe.

IDC announced (in the above article) that Android got a 31% market share of Western European smartphone shipments in Q4 2010, compared with Apple’s 20% :

And according to Kantar WorldPanel, Android’s market share for smartphones sales in Q1 2011 is 38% in the UK (vs iOS’s 23%). In Germany, they announced Android’s market share was 35% (vs iOS 24%), in France it was 36% for Android vs 23% for iOS, and in Italy, iOS was shortly ahead with 20% while Android was at 19% (It seems that a lot of smartphones sold there are running Symbian).

All the numbers can be found here, although in a very blurry version:

Nevertheless, since Android’s growth was very sudden (its market share a year ago was only 4% according to IDC), what does it mean for usage and the current installed base?

Mobile OS market share data from GlobalStats StatCounter (an analytics solution which aggregates data fro all the websites that uses it). This data collection method has issues, counting hits on mobile browser is different than giving accurate installed base market share, but it’s nevertheless interesting to see the trends. 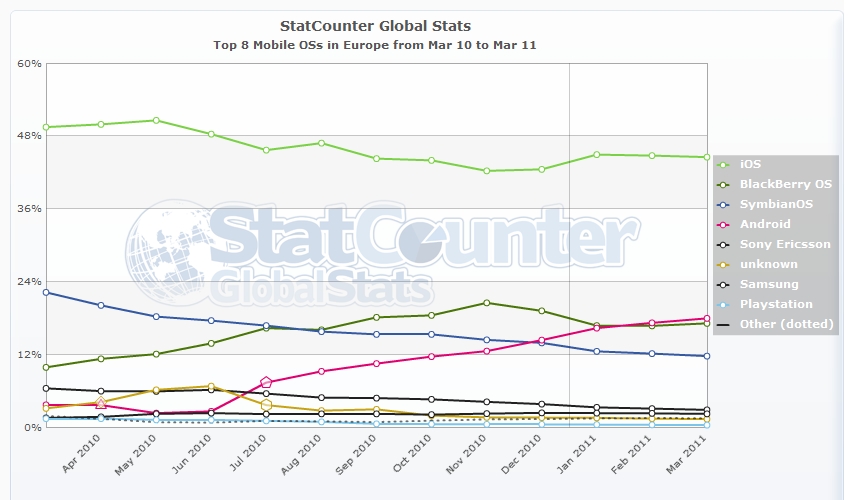 According to them, iOS has just below 45% of the market, when Android is just below 18%, a massive progression from just 4% a year ago. Symbian, Nokia’s OS, has declined a lot during that time.

ComScore has also recently published a study where they estimate the European smartphone installed base for the 5 biggest EU countries (Germany, France, UK, Italy, Spain). According to this report, the installed base for iOS devices (iPhones, iPod Touch and iPad) in those 5 countries is just below 29 millions, of which 16 millions iPhones, while all Android devices (smartphones and tablets such as Samsung Galaxy) reached 13.4 million.

It’s important to distinguish market share in terms of sales and the installed base of devices in a territory. It seems that sales-wise, Android is now ahead, but there is still some space ahead to catch up with iOS, which has an important advance in terms of installed base and usage. According to previous studies by AdMob, Android users have a comparable usage of mobile web and apps compared to users of Blackberry and the late Symbian, who used those features much more rarely, so it implies that it shouldn’t take too long to Android to catch up though in terms of applicable market for mobile connected games (which is our main focus here). Mobile ad network inMobi already reports that most of its impressions in March 2011 already come from Android devices (29%, vs 20% for iOS).

So, coming back to games, what’s a developer to prioritize now? At the moment, it seems that the growing market share and the reduced competition on Android make the platform slightly more attractive for smartphone focus, but still not there yet for a tablet focus. On the other hand, that space is quickly becoming even more crowded as the Apple App Store due to the simpler publishing process. Marketing games on Android is poised to become less hit-or-miss, but also more complex and time-consuming than the App Store due to the probable multiplication of channels such as the Amazon store. In the future, it could certainly open the way for more dedicated Android publishers. In all cases, now’s a good time to take a strong footing there.

Paris Web Game Conference 2011
Scroll to top
We use cookies to ensure that we give you the best experience on our website. If you continue to use this site we will assume that you are happy with it.Ok