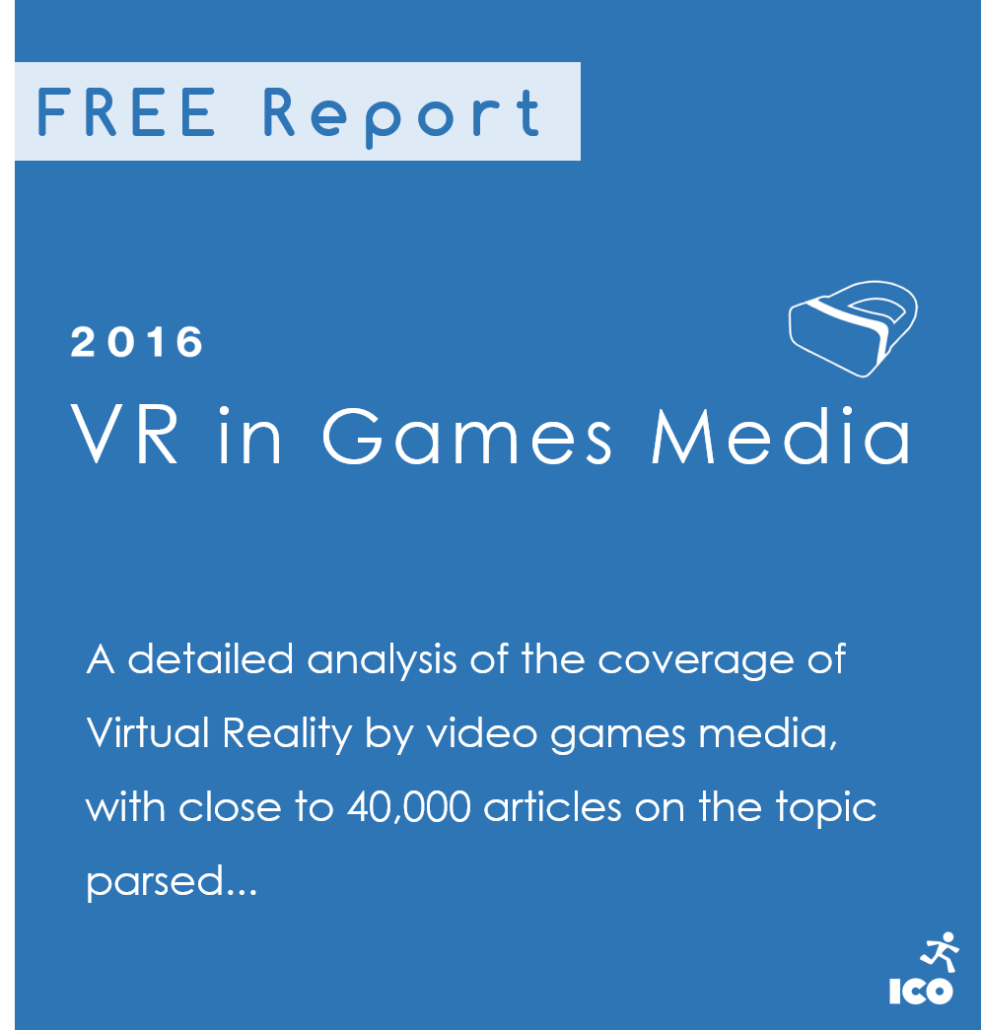 This report explores VR in online video games media in 5 languages in Europe and North America: English, French, Italian, German and Spanish over 12 months (May 2015 to April 2016).

At ICO Partners, we have been very interested in following the coverage of VR topics in online video games media.

This report tries to answer the following questions :

Excerpt and examples of key findings

One of our findings was done by looking at the ratio of websites that covered VR in some way, compared to the ones that didn’t cover the topic at all. 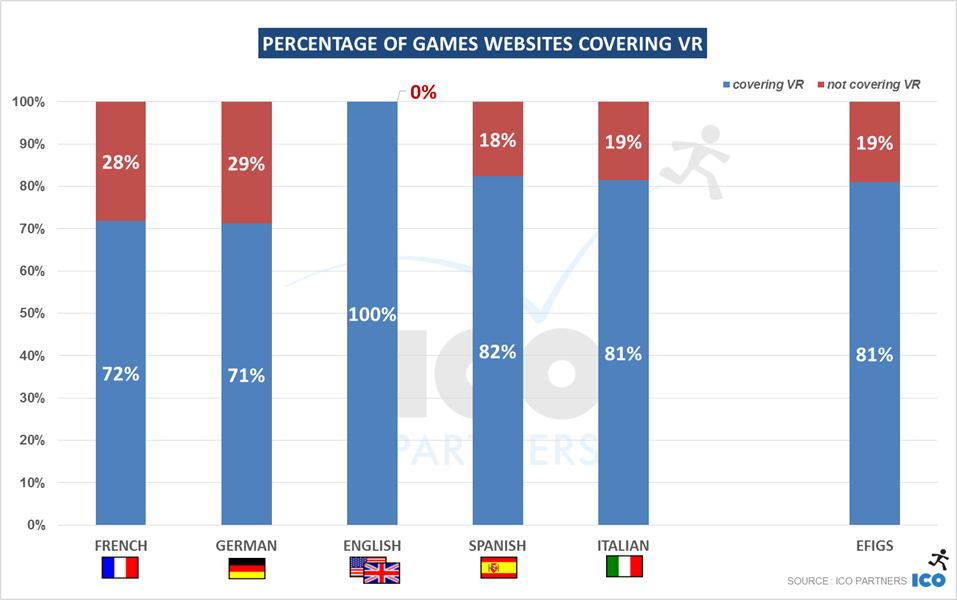 The criteria being very generous (any mention of VR or a VR related device), we were expecting very high percentages. We found two things we didn’t expect:

Looking at the volume of content shows another different trend. 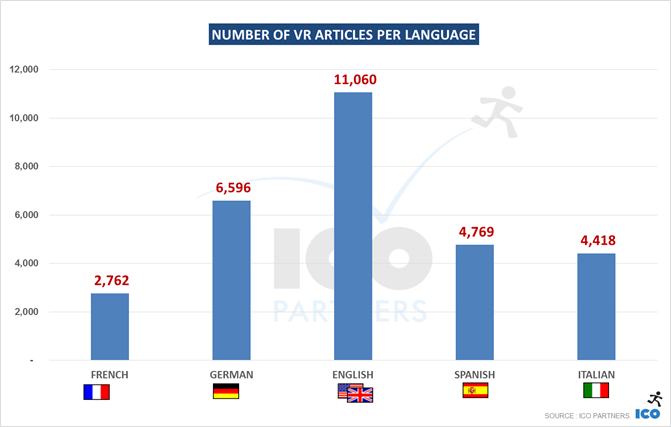 VR as a topic is incredibly weak among the French video games media. They saw fewer articles than in any other languages. While the percentage of German media covering media is the lowest, the ones that did cover VR wrote more than 6,000 articles referring to it. This is still a lot lower than the total number of games articles in English and highlights the fact that, at the  moment, VR as a topic for video games media is a higher priority for English media than for the others studied.

We put together a formula called “VR Media Impact” to help us identify the most enthusiastic and influential websites about VR. We took into account the number of articles about VR and the popularity of the websites (based on its Alexa ranking): 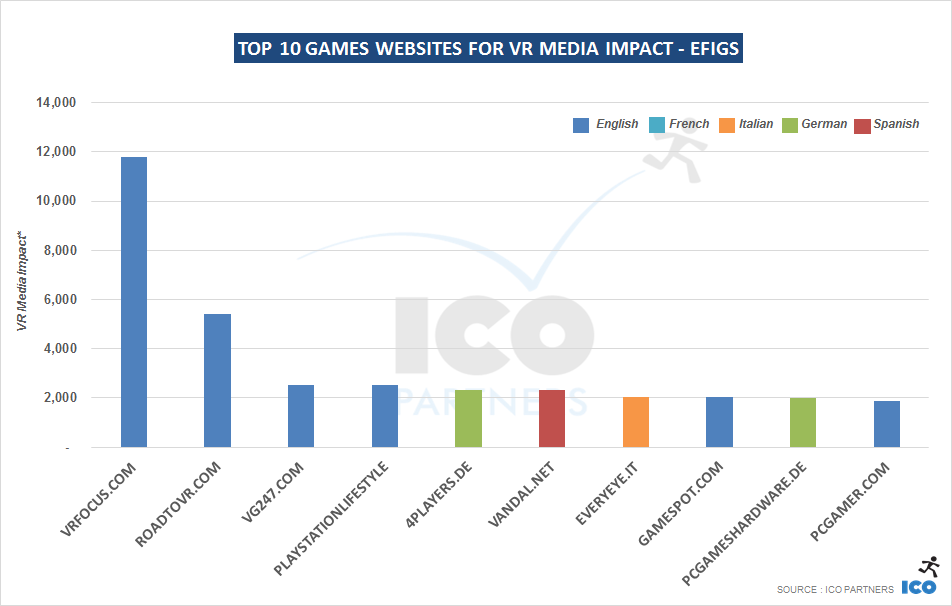 There is a clear majority of English websites (and lack of French media), but tellingly, the top 2 media are dedicated to VR. For them to appear here is not only based on the fact they have written a lot on the topic, but also speaks to the fact that they managed to build an audience and have a strong enough following.

The report has more detailed ranking for each language if you are involved in the VR scene and would like to see more.

Lastly, I wanted to show how the coverage for the key 3 VR HMDs (Head Mounted Devices) has evolved over those 12 months. 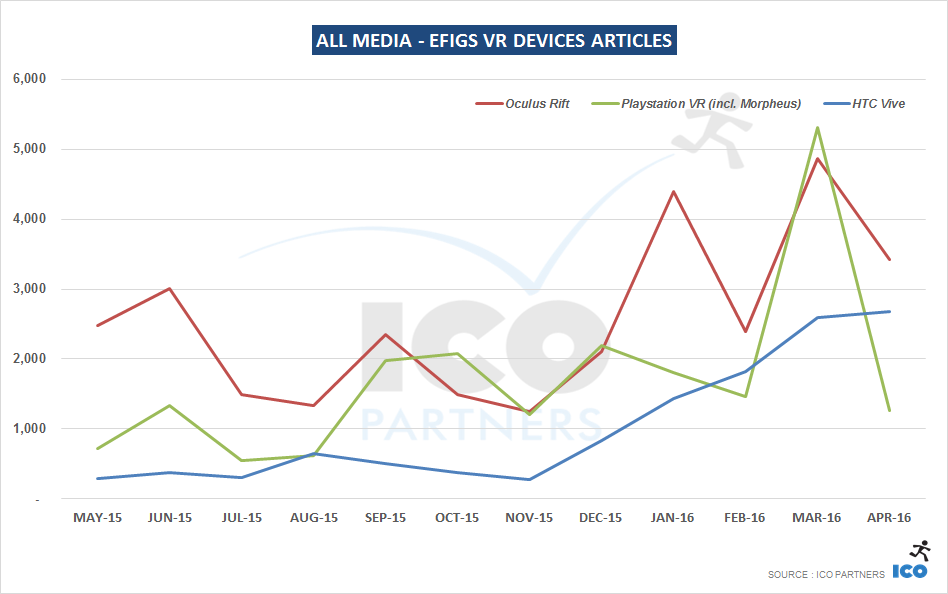 All 3 platforms are trending towards more coverage overall. However, while Oculus is leading the way most months, it is slowly losing its lead. Playstation VR secured more coverage in March 2016, where it announced its release date and pricing, showing promise for when it releases towards the end of the year.

It is also very interesting to note the slow but steady growth of the HTC Vive media coverage. The lead in brand awareness that Oculus built over the years probably helped in getting good coverage for the important announcement, but the HTC Vive is now catching up to it, with the media at least.

Table of Contents
Scroll to top