For almost seven years, part of my job in the video games industry has been to look at, analyze and predict review scores of games. I’ve done this for a variety of different clients, from my previous employer EA to a host of smaller and bigger indie developers. At ICO, we have quite a bit of experience and knowledge in supporting game launches. Whenever a release of a game comes close, one of the things that always pops up, without fail, is Metacritic and review scores.

Quite a lot of times, we are answering the same questions and dispelling the same myths. That’s why I thought it would be nice to have all those answers in a handy, online guide. If you use or are interested in Metacritic, the following Six Tips to Get a (Better) Metacritic Score might be for you.

Why Care About a Metacritic Score?

Well, why should you care about Metacritic? First off, regardless of whether you think Metacritic is relevant or not, it shows up in some interesting places: for instance, on the Steam store page of a game, as well as in Google results if you search for a specific title. And, of course, it is still relevant if your client, employer or publisher cares about it for internal accountability or development milestones.

Depending on the genre, platform, type of outlet and popularity of a game, an AAA title can see over 100 critic reviews on Metacritic, but the vast majority of the games will only be reviewed by a handful of outlets. In most cases, indie games won’t get a Metascore at all.

That’s a shame because there are some relatively easy tricks to get listed and to boost the number of review scores.

Information on how Metacritic works is readily available and can be found on for instance on the official website.To lift their own description from the site itself:

“To put it simply, a METASCORE is a weighted average of reviews from top critics and publications for a given movie, TV show, video game, or album.”

If you delve a bit deeper, a couple of important details, easily overlooked due to their simplicity but important nonetheless, start appearing:

Tip 2: Find out what Metacritic listed sites are out there

Actually, Metacritic provides an official list, which you can find here. It is easily overlooked but tells us which outlets are in the system. It gives the developer, publisher, or PR agency quite a bit of agency because it’s from this list of accredited media the aggregated scores are pulled from. Take a closer look and you’ll find the following: 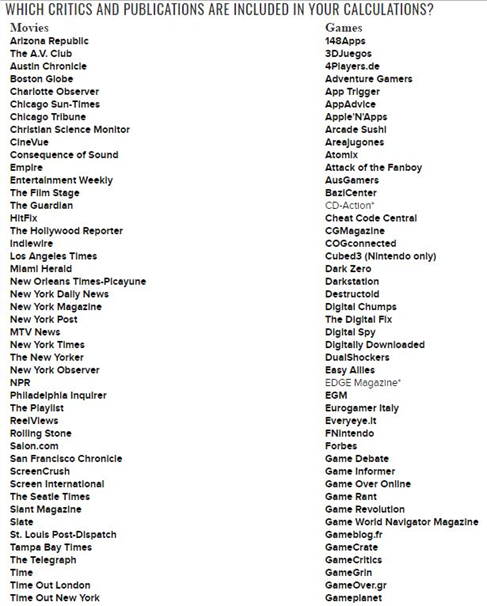 The official media list is divided in general interest media (left) and game media, both print and online websites (right). The outlets on the right are the ones to watch out for.

This line-up doesn’t change often but it’s worthwhile to check the list on a regular basis.

It’s pretty obvious that if you want to have a Metacritic score, you’ll only have to deal with those 130+ outlets which are listed on the site itself. Not only that, a fair number of these might not even be relevant to you for instance if they only cover mobile games (148Apps) or only cover Xbox titles (SomosXbox).

The main issue with not getting reviews has everything to with the limited amount of time and manpower most of these media have to cover new games. They are overworked, and at certain times of the year (E3, Christmas period) have all their time booked up by triple AAA titles weeks and weeks in advance. Finding a spot to check out a new game is a difficult undertaking for a critic, especially with the vast amount of games being released. For instance, Steam sees on average between 70 to 120 titles launching every week.

You want to know the best way to make your game grab attention AND get those elusive journalists to talk about your game? Do check out this excellent GDC talk from my esteemed colleague Thomas Reisenegger.

By the way: did you know that at ICO, we have a free weekly newsletter which will show you all the weekly Steam releases? If you are interested, don’t hesitate to follow this link and subscribe.

Research the list and concentrate your effort. Certain countries are under-represented while others have a greater proportion of their outlets featured. Case in point: France versus Italy, with the former only having 2 smaller, Metacritic-listed websites (Gameblog.fr and JeuxActu) while the latter has 7 (Eurogamer.it, Everyeye, The Games Machine, Spaziogames, etc.) 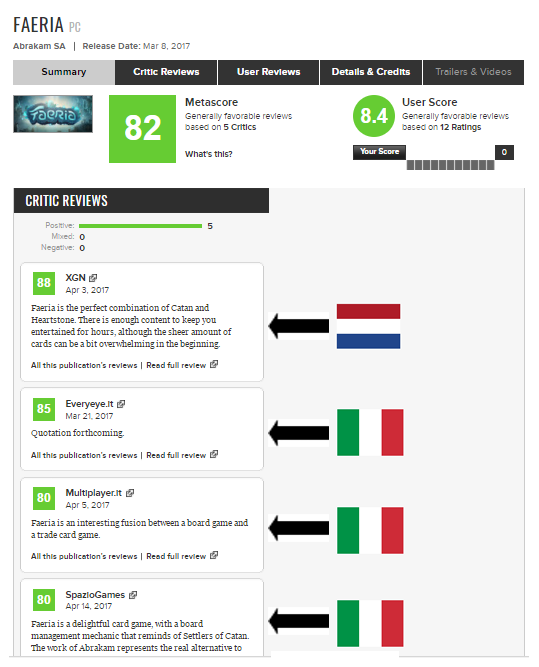 Smaller media in smaller countries are way easier to reach out to. They have a much a higher chance of being able to spend some time reviewing a game flying under the radar.

One of the reasons that there is a discrepancy in the number of high-profile critics for each country on Metacritic is that most of the traffic on the platform is English. Accredited media outlets must submit their own score, plus a written summary in English, to be included on the site. This clearly decreases the incentive for other-language based media to receive the fruits of Metacritic (more traffic, more clicks).

What this also means is that media outlets sometimes review a game but forget to submit their score. If they’ve reviewed your game but the review is not yet on Metacritic: give them a gentle nudge and a friendly reminder, and more likely than not, they will update their review on Metacritic.

It will happen that reviews will come in with a score that feels unfair. What also happens is that a review can read positively, but the score doesn’t correspond. Also, when you have a multiplatform release, you don’t know under which platform certain scores will appear. All these things can have an effect on the Metascore and one thing we notice with the above concern is that developers or publishers always want to do something about this.

Instead of just saying it, better to use the power of the GIF in combination with one of the greatest animated series to underscore this tip.

Truth be told, there is little to be done. For instance, most critics specifically list which platform a game was reviewed upon (and this will be duly reflected on which platform the score will appear).

The following is a bit bleak but deserves to be mentioned. Asking a media outlet to change a score is a big no-no. The same goes for asking Metacritic to switch scores around. If you update a game after it’s release, expecting an update on a score, it won’t happen. Once an outlet submits a score, it will remain.

Who can forget Polygon’s glowing review of 2013’s Simcity, a resounding 9.5 which was duly posted to Metacritic? One of the first out of the gate, the review got published before the game had launched, but after server problems snowballed out of control and the game saw some very harsh criticism, Polygon changed their review score not once, not twice, but three times before settling on a final score of 6.5. The original review on Metacritic never changed, as the site’s policy is to only accept a publication’s first score. When a score hits Metacritic, it sticks.

Boiling it down to a tl;dr section, we would finish off by condensing the above into a few supertips:

Job opportunity at ICO Partners: German PR Executive for Video Games
Scroll to top
We use cookies to ensure that we give you the best experience on our website. If you continue to use this site we will assume that you are happy with it.Ok