Tag Archive for: board games

As promised last week, here is a deep dive into the Games category on Kickstarter for the year 2016. The format will follow the same as the article I did last year on the same topic. Please bear in mind that I will exclusively look at Kickstarter, and not any other crowdfunding platform here. For a more general outlook, specifically on video games, you can read my guest article on GamesIndustry.biz.

As usual, at the end of the article you can find more graphs in the dedicated SlideShare presentation.

As seen last week, like most categories on Kickstarter, Games saw a decline in 2016 in money raised compared to 2015 (-8%). This is still the second biggest year on record in terms of money raised, and in fact, there were more projects funded in the category than ever before (+14%). 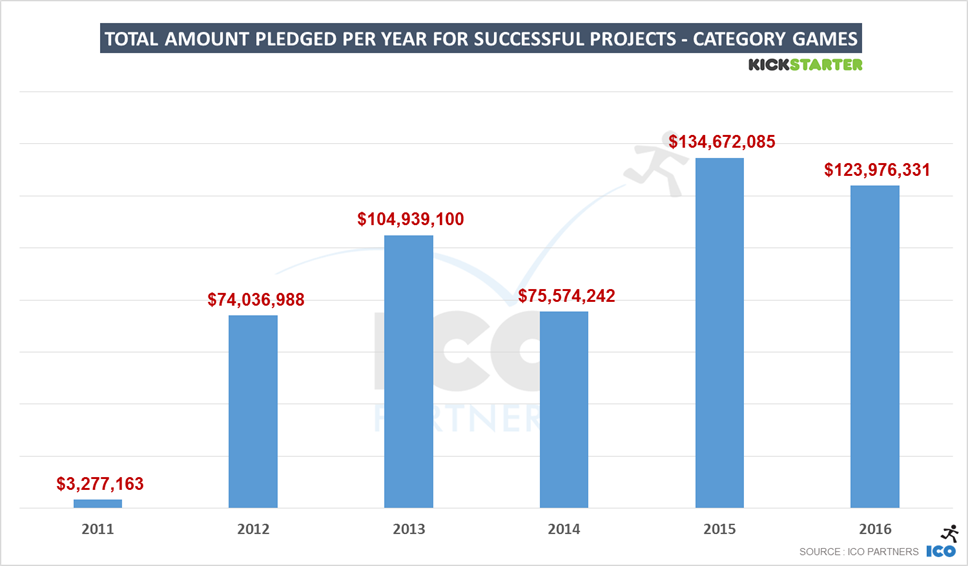 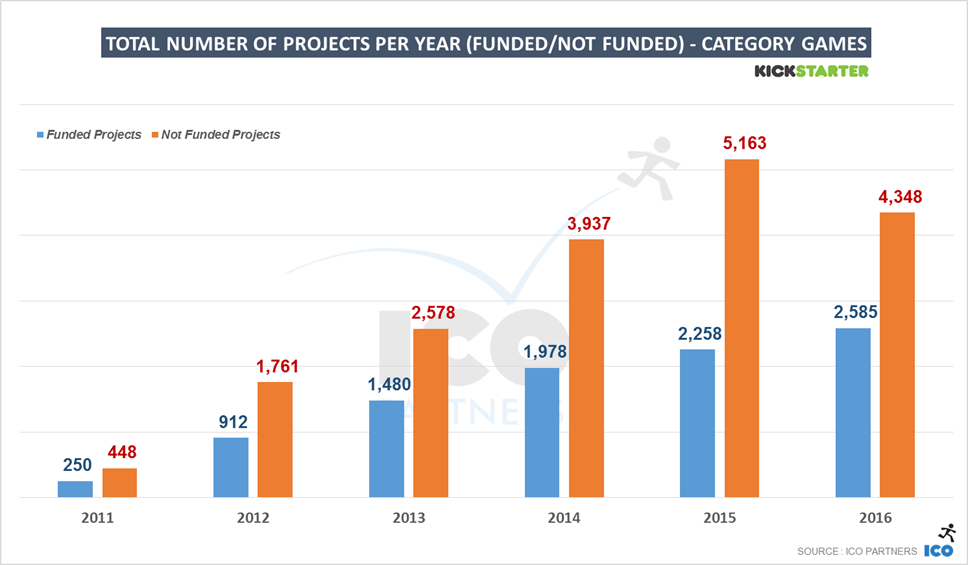 The growth in the number of funded projects however comes with a decline in the total number of projects seeking funding on the platform. Fewer projects on the platform, but more projects funded – the ratio of success is climbing. The platform is maturing, the general audience understanding of what it takes to get funded is getting more sophisticated. 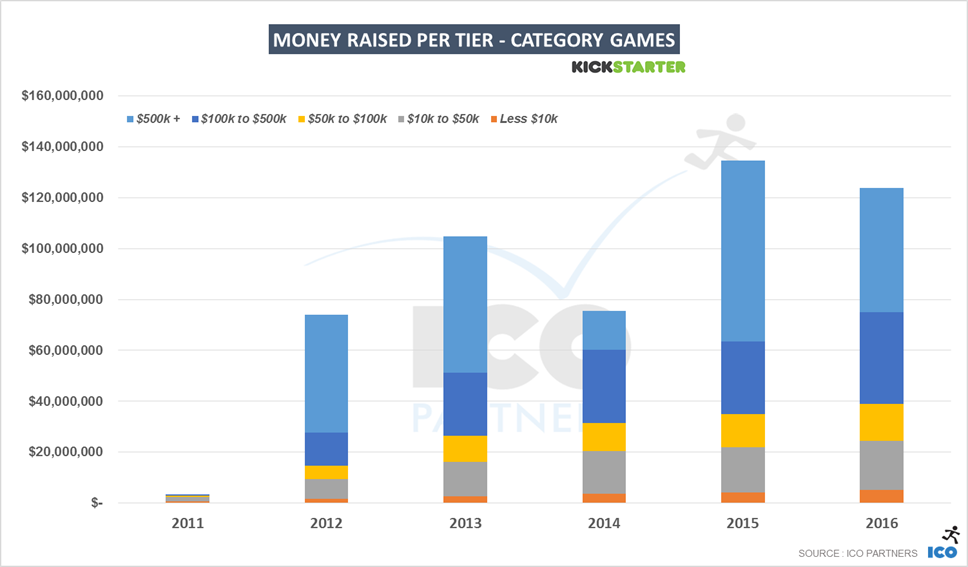 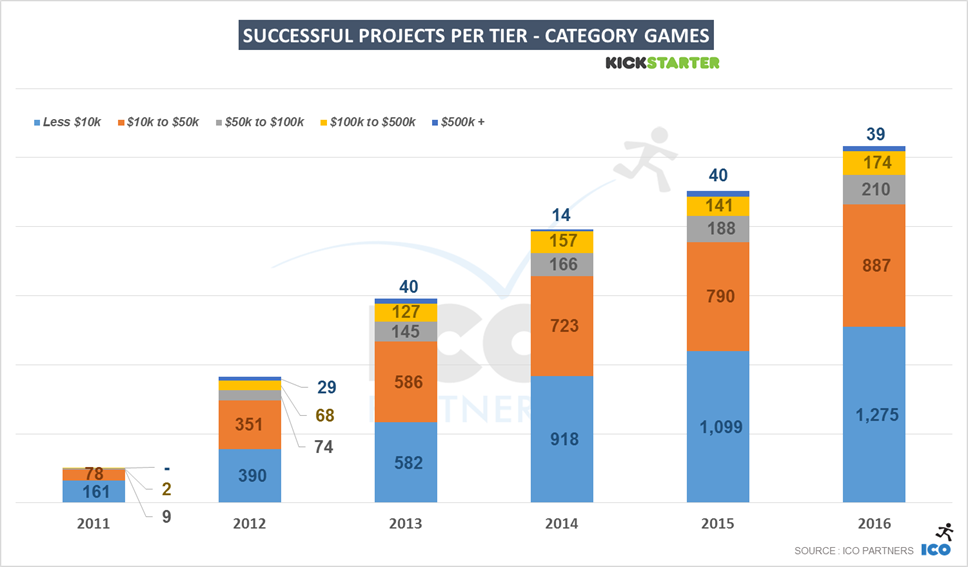 In terms of money, it’s interesting to observe that the overall year-on-year decline only happened at the highest tier, with the projects raising $500,000 and more. All other tiers showed growth (+18% across all those projects).

In both number of funded projects and money raised, the tier with the largest growth is the $100,000-$500,000 tier (respectively +23% and +27%). In last week’s blog post, the trends were interpreted as showing an increase in the professionalism of the campaigns on Kickstarter, and this again reinforces that sentiment. 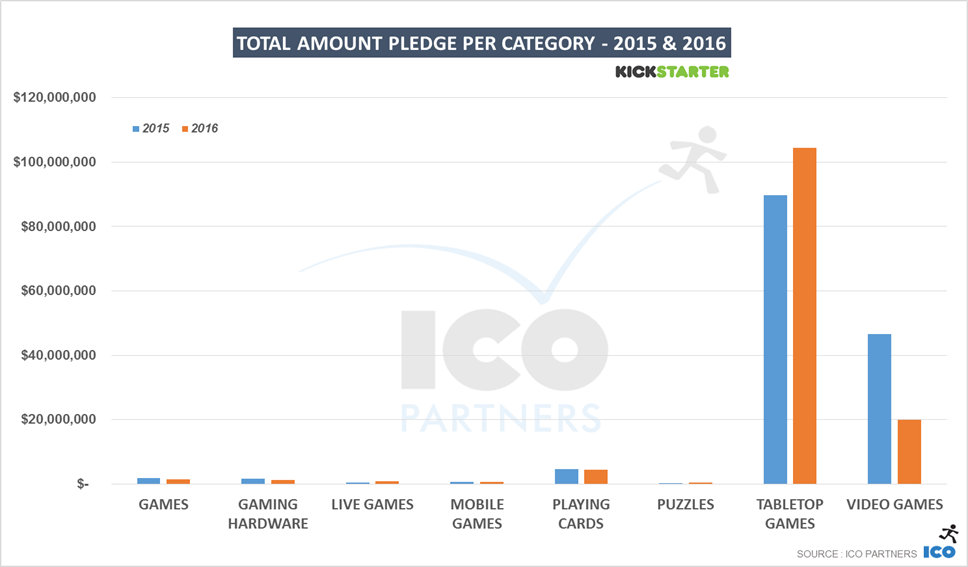 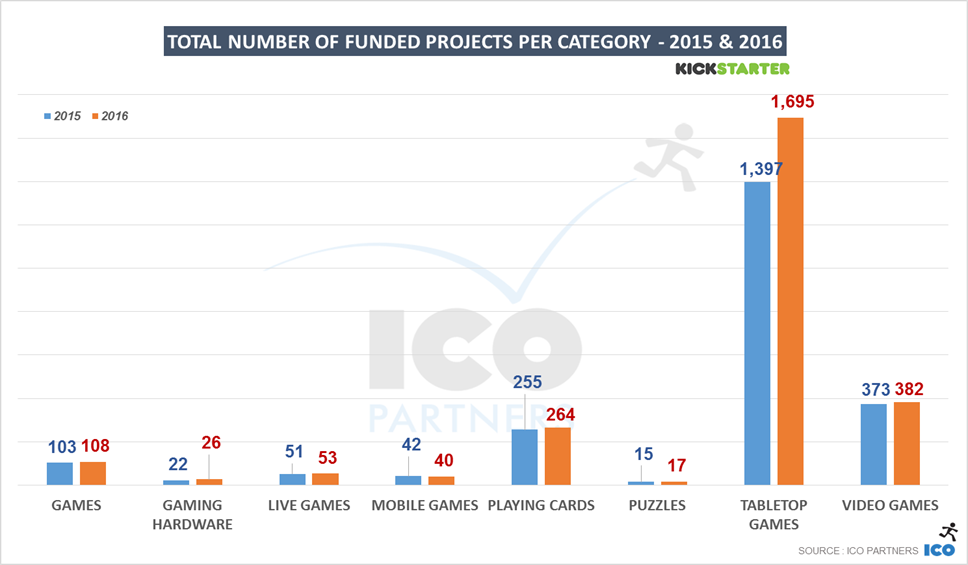 Like last year, there are two subcategories making up the most of the Games category: Tabletop Games and Video Games. All the other subcategories only account for 7% of the money raised and 30% of the funded projects.

Overall, most of the decline in the games category happened for the Video Games projects. Less money (-57%) and fewer funded projects (-13%) account for the difference from last year for the Game category.

Before getting into the two main actors of the Games category on Kickstarter, here are a few new insights on the smaller subcategories from 2016: 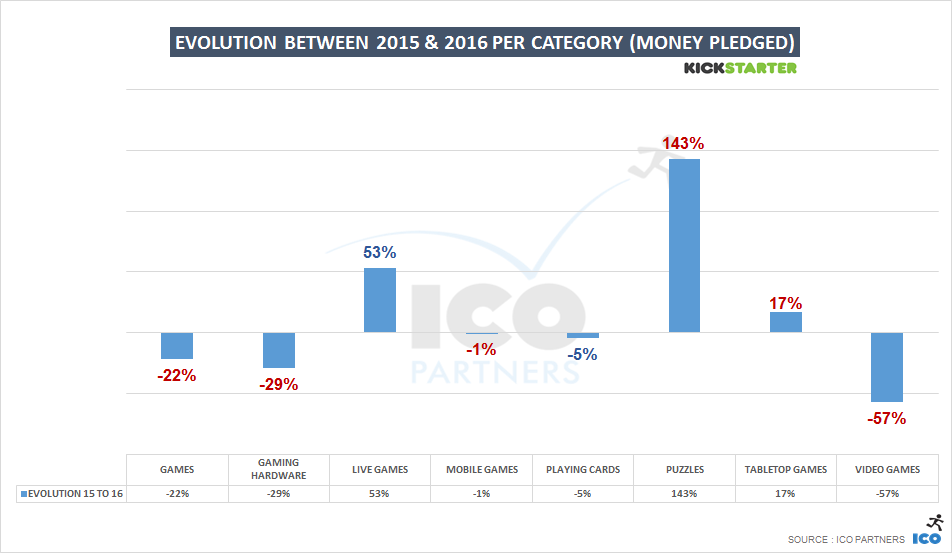 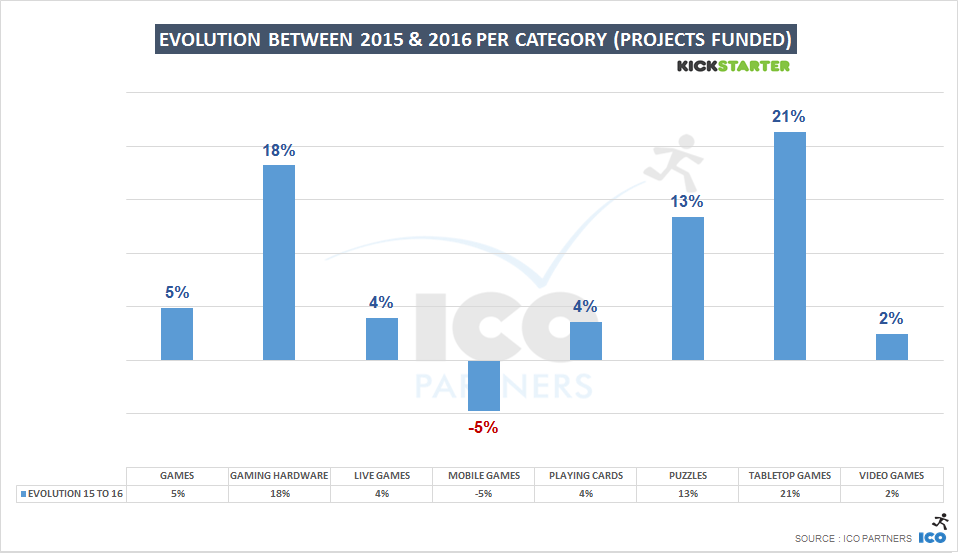 And now, to the main contenders. 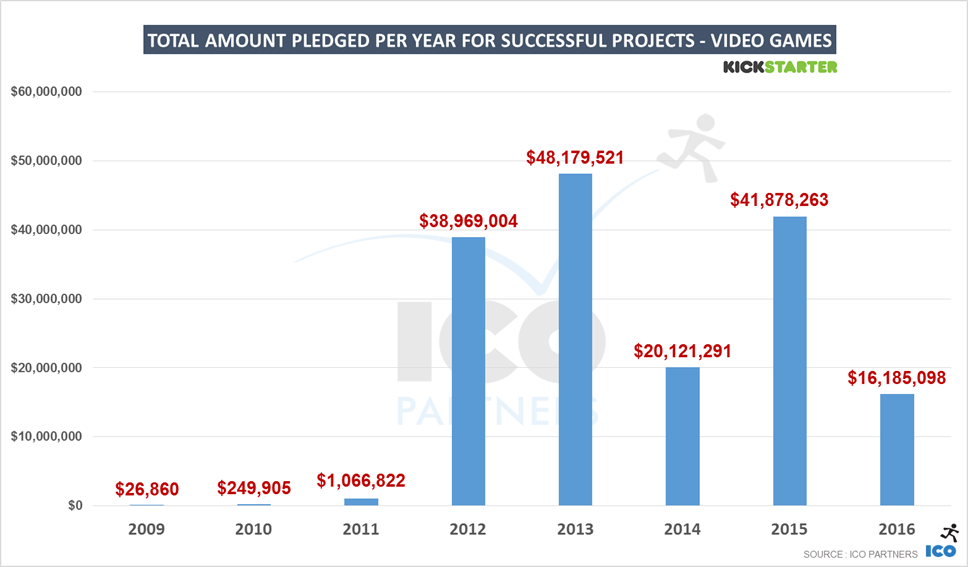 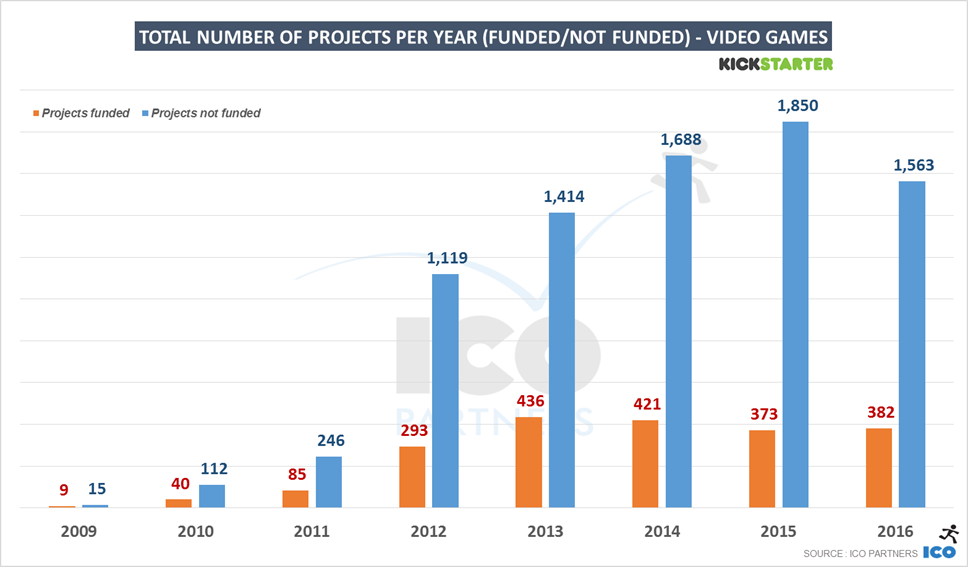 There is no ignoring the significant drop in the total amount of money raised for video games in 2016. With $16m, this is the lowest raised on the platform for this category since it exploded in 2012 after the initial funding of The Broken Age by Double Fine.

When accounting for the total number of projects funded though, the year-on-year change is a lot less drastic (-13%). That’s the platform 3rd best year in that regard. Before diving into the breakdown of projects per tier, it is obvious that the significant drop in the total amount of money raised is significant partly due to the absence of large projects. 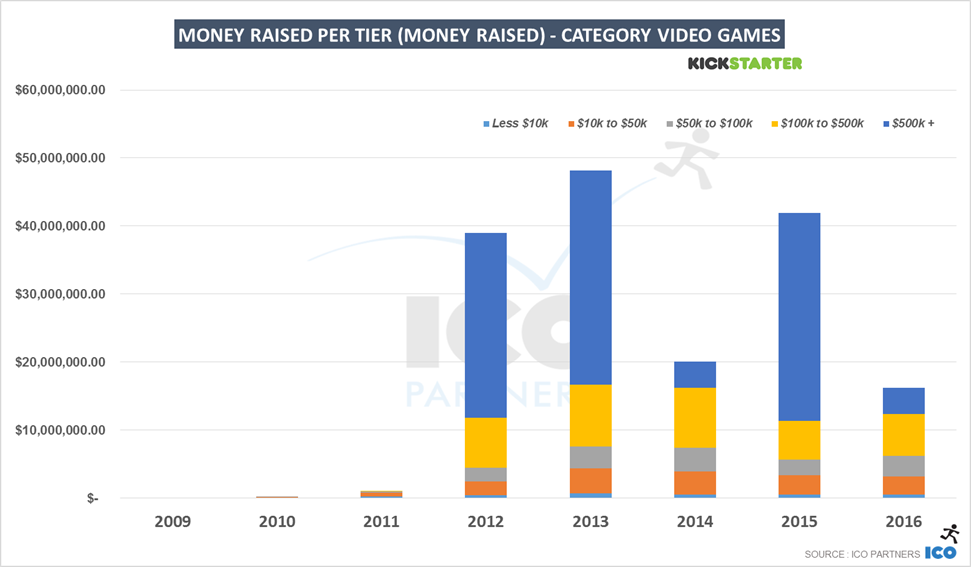 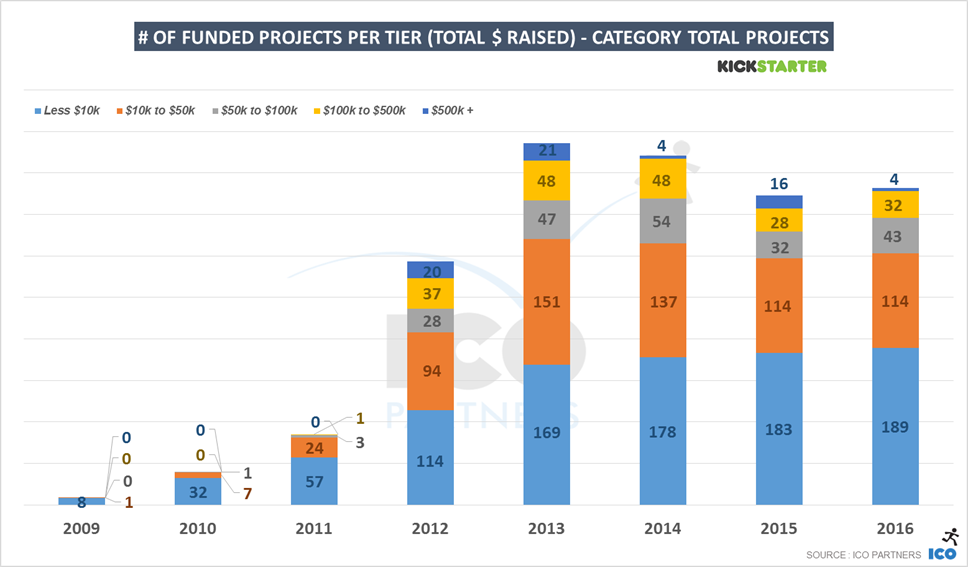 Looking at the amount of money raised per tier first, the highest tier of funding was almost a 1/10th of what it was in 2015. If you ignore that tier, there actually was more money raised on Kickstarter than the previous year. Kickstarter in 2016 missed out significantly from this lack of high level projects. Of course, Fig.co hosting Psychonauts 2 and Wasteland 3 didn’t help. But even if these two projects had been funded on Kickstarter, 2016 would have been a low performing year (whether you account for the project equity of the Fig.co or not).

It seems that there’s only ever a limited volume of such large projects considering crowdfunding, meaning there will be a visible effect on the overall performance for the video games category in crowdfunding in any given year based on the volume of these high performance projects – there will naturally be years where lower numbers of these big projects come to the platform due to factors such as the long development cycles. This will likely continue, unless crowdfunding suddenly becomes more popular with studios (in the way it’s popular for Tabletop Games as we will see next), but this seems very unlikely given the current trends and the nature of what it takes to create big video game projects. 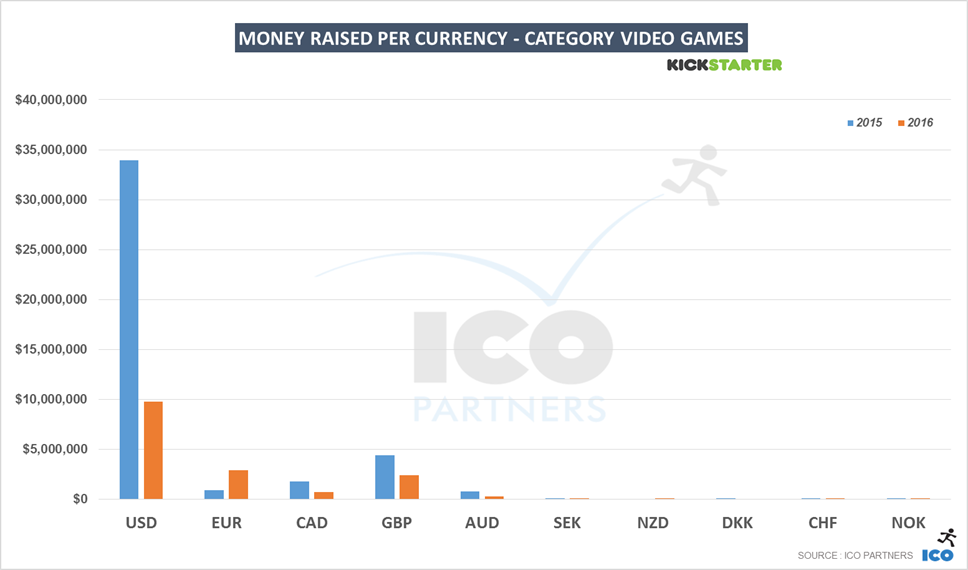 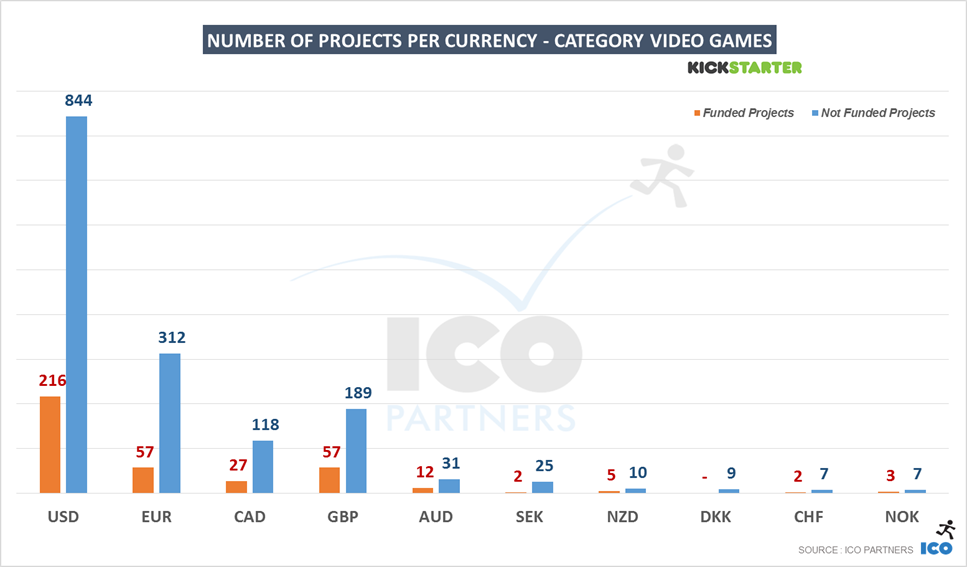 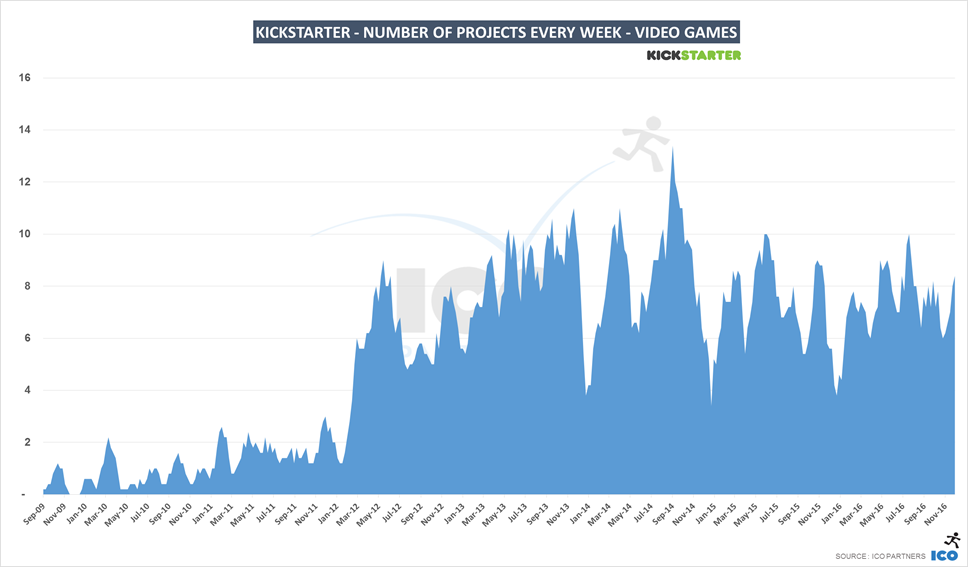 Looking at the number of projects every week on Kickstarter, the trend is not of a collapse in the number of funded projects. There were fewer projects launched on the platform, and across all categories, but for the past 2 years it seems that the volume of projects being funded is actually quite stable.

Another unseen competitor is Steam Early Access. The minimum required quality to launch a crowdfunding campaign for a video game is such (beautiful assets, good video, demonstrable gameplay) that it wouldn’t be surprising if many projects considering crowdfunding simply decided to skip it, and go in Early Access instead, with the idea to be able to start getting revenue regularly directly on the main platform the game is sold on to the end users. 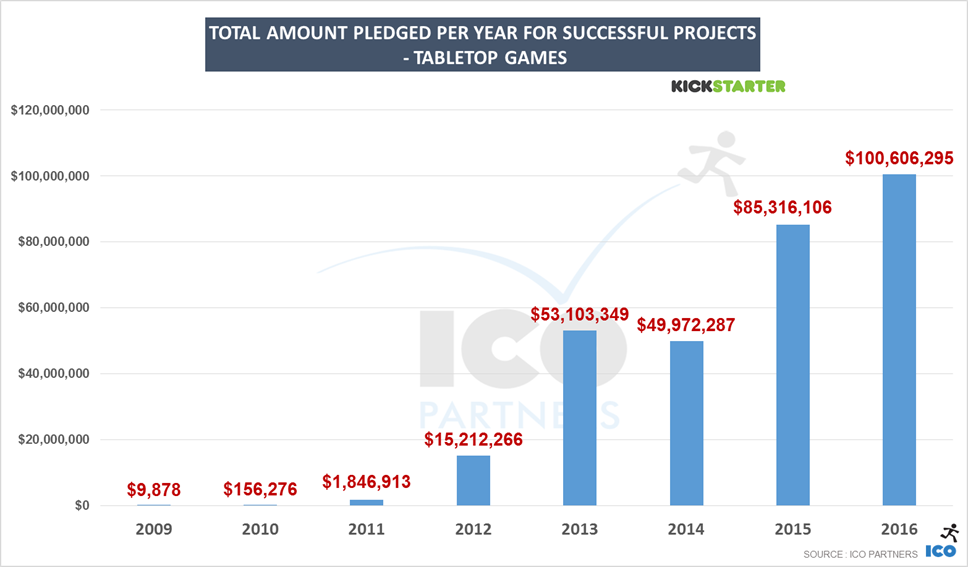 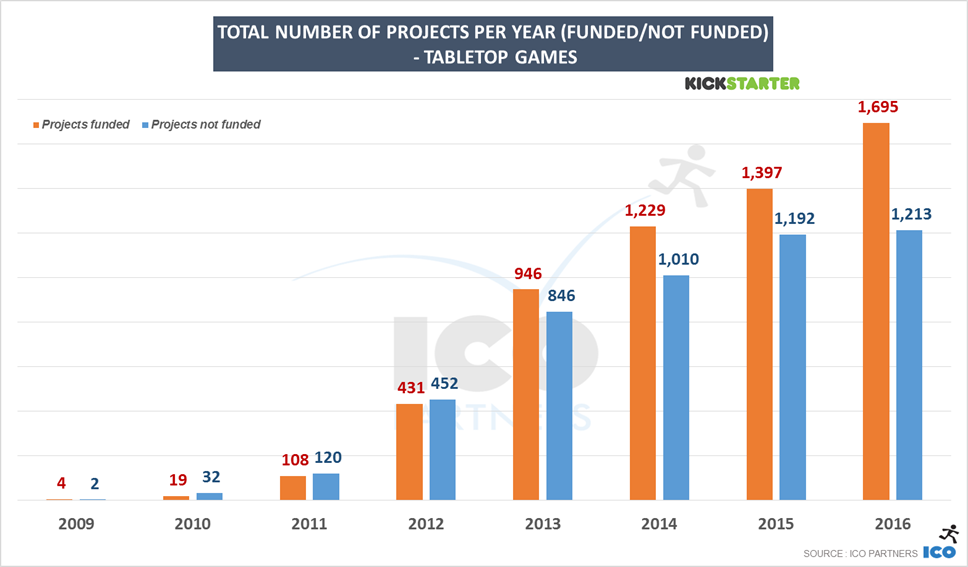 Over the years, Tabletop games have become the crown jewel of the Games category on Kickstarter. More projects got funded (+21%) for a larger total amount of money (+18%) than in the previous year, with more than $100m pledged to successful projects.

Recently, in a Polygon article about the upcoming PAX unplugged, the ICV2 estimate of $1.2bn for the size of the tabletop North American market was mentioned. If we estimate the market has grown a bit since that estimate, say $1.4bn, and if North America represents 45% of that market (making up numbers here, just for the thought exercise), that’s a $3.1bn global market. With $100m a year on Kickstarter, that’s 3% of the whole market transaction happening solely through Kickstarter. My estimates are of course very shaky, but they’re not totally unrealistic. That percentage is likely to be even higher when considering purely the North American market, which has historically been more culturally friendly to crowdfunding.

In the tabletop games industry, Kickstarter is not only the primary platform for crowdfunding, but is also now a key actor to the whole ecosystem. 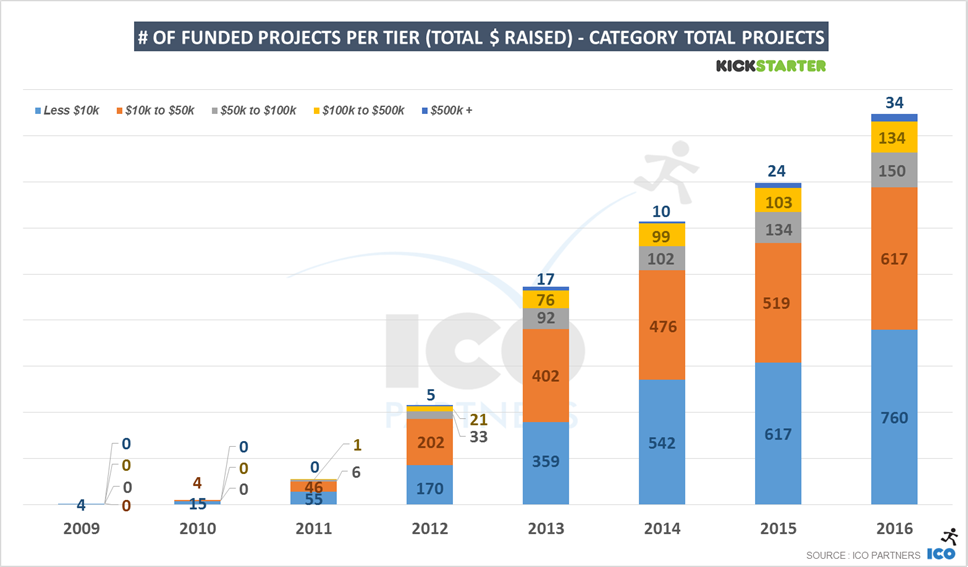 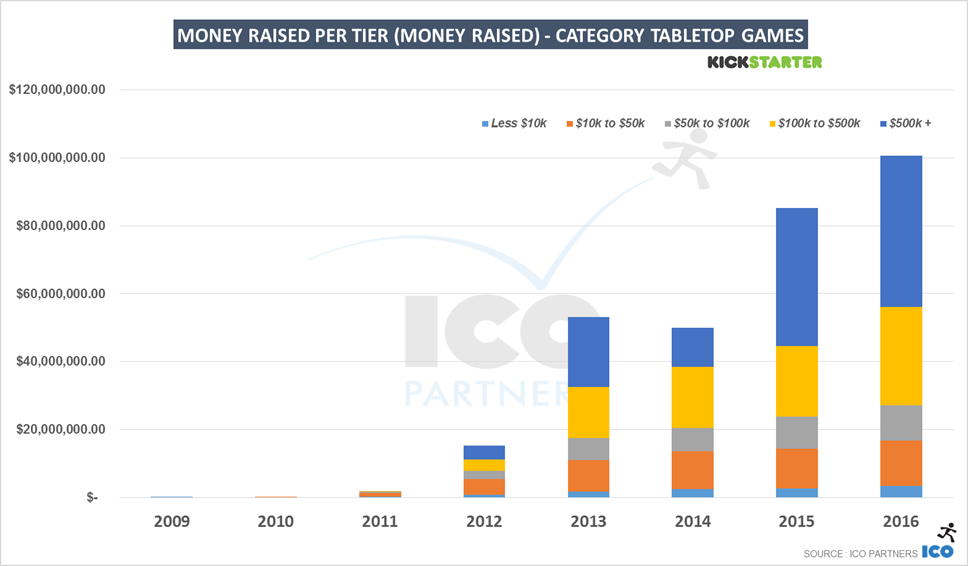 There was more money and more funded projects across all the different tiers in 2016. Interestingly, compared to video games, the lowest tier (under $10,000)  grew 32% in the total amount of money raised. 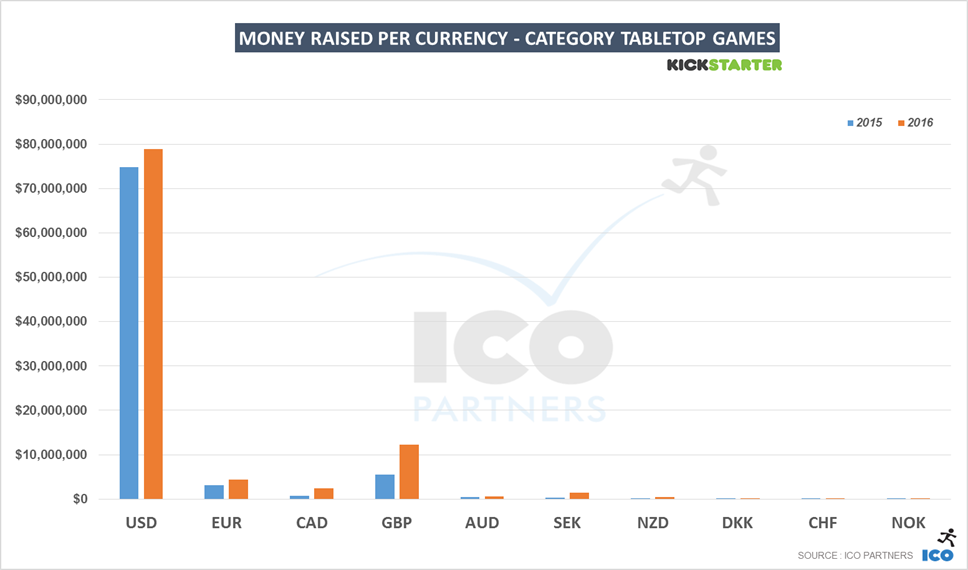 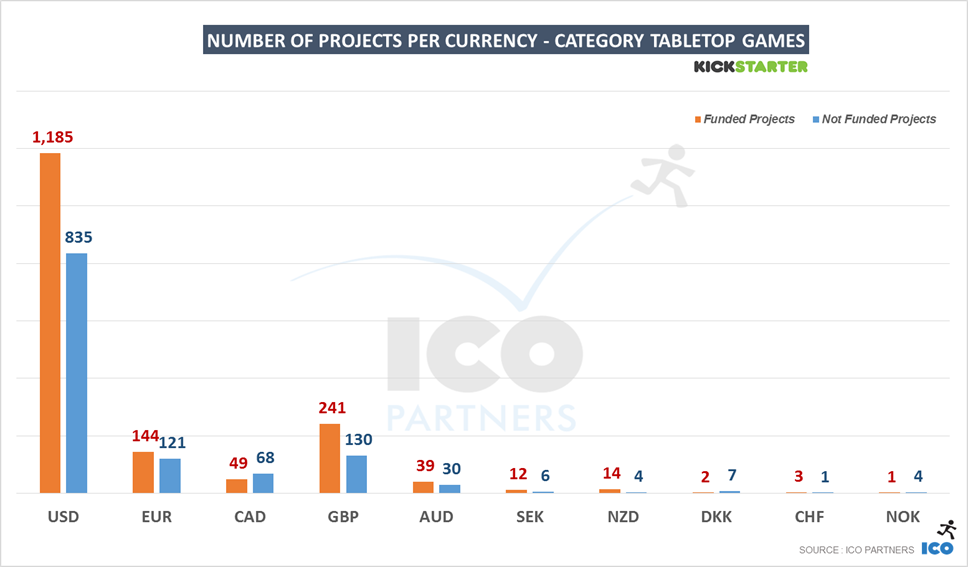 The biggest relative increase this year was for the GBP projects, more than doubling the amount raised year-on-year, and this despite the currency taking a nosedive in the second half of the year due to the Brexit referendum results.

The USD projects are still largely dominating though, representing almost 80% of the total amount of money raised.

There seems to be a lot of growth potential for European tabletop projects on Kickstarter, especially considering the cultural importance of the region for the tabletop games business. The lower numbers at present might also be due to local crowdfunding platforms performing particularly well. For instance, Blackbook Edition, that runs its own crowdfunding platform for tabletop roleplaying games in French, has raised $1m in 2016 alone. 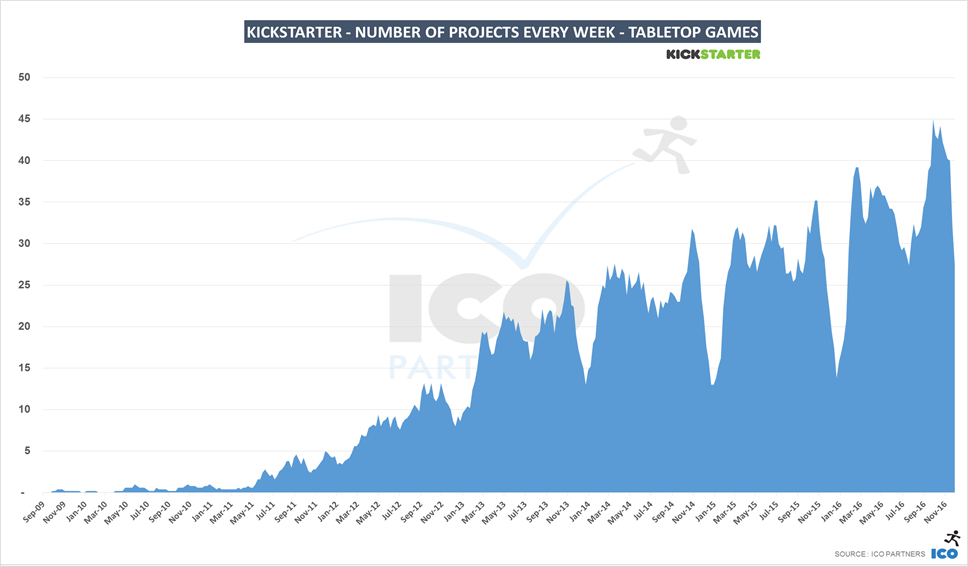 Compared to the relatively even and stable video games chart, it is very clear that the Tabletop Games category has steady growth in the number of projects that get funded each week.

Finally, at the beginning of the year, and thus not showing in any of the data present, the largest Games campaign ever funded on Kickstarter ended, raising a staggering $12.3m. Alone, it raised about 12% of what all Tabletop games raised in 2016. That was on January 7th. I feel very confident that 2017 will again be a record year for Tabletop Games on Kickstarter.