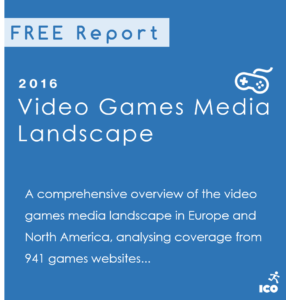 We thought it could be interesting to answer some questions that developers, publishers, PR professionals and the media can all ask:

We hope that this statistical analysis can help all actors of the industry understand the video games media landscape better.

Excerpt and example of key findings

One of the things the report looks specifically at is the coverage received by the major gaming platforms over a year. There are two things we considered when looking at the relative media presence of those platforms. First, the percentage of websites that mentioned the platform at all. 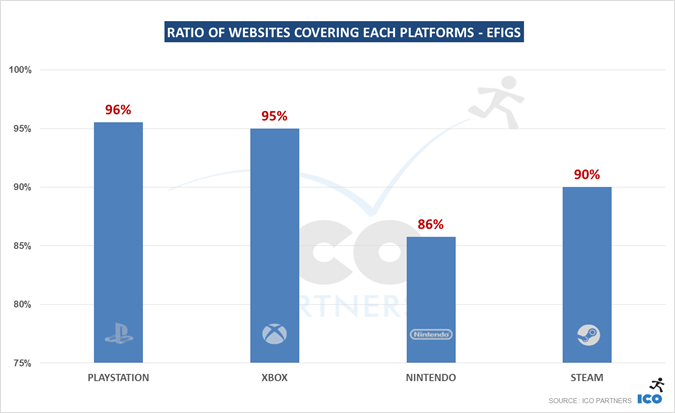 There are two very clear leaders, with both Xbox and PlayStation having 95+% of the games websites mentioning them. The main consoles are so ubiquitous that it is surprising that they aren’t at 100%, to be honest. But you have to account for PC-only media as well, and they are unlikely to have much coverage of the consoles.

More surprising is how Steam, which is not a platform that has a very pro-active communication strategy, still has 90% of the websites mentioning it. This is ahead of the Nintendo platforms (Wii, Wii U, 3DS) standing at 86%.

Then, beyond the websites, we also looked at the volume of articles for each platform: 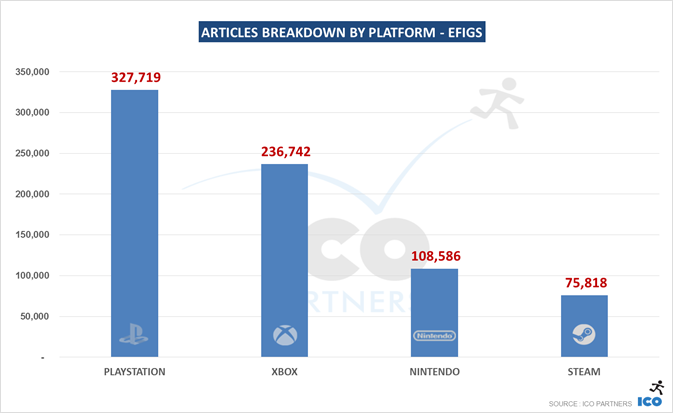 If you are familiar to the blog, you won’t be surprised to see PlayStation ahead here. They have a very strong media presence, and they are constantly ahead of the other platforms in terms of media coverage. In terms of scale, that’s still 3 times the total number of articles mentioning the Nintendo brands, and almost 30% more than the volume of articles mentioning the Xbox brand.

Steam being behind matches with what we were referring to earlier, and the lack of a concerted communication strategy on the platform from Valve. Much of the coverage is inherited from studios and publishers launching their game on the platform, and without consideration for the brand presence.

One objective of the report is to provide some reference points in regards to how different the media from the different countries are a different from one another. We are able to put together this table to show what we called the “media affinity” for certain platforms based on the language of a website. 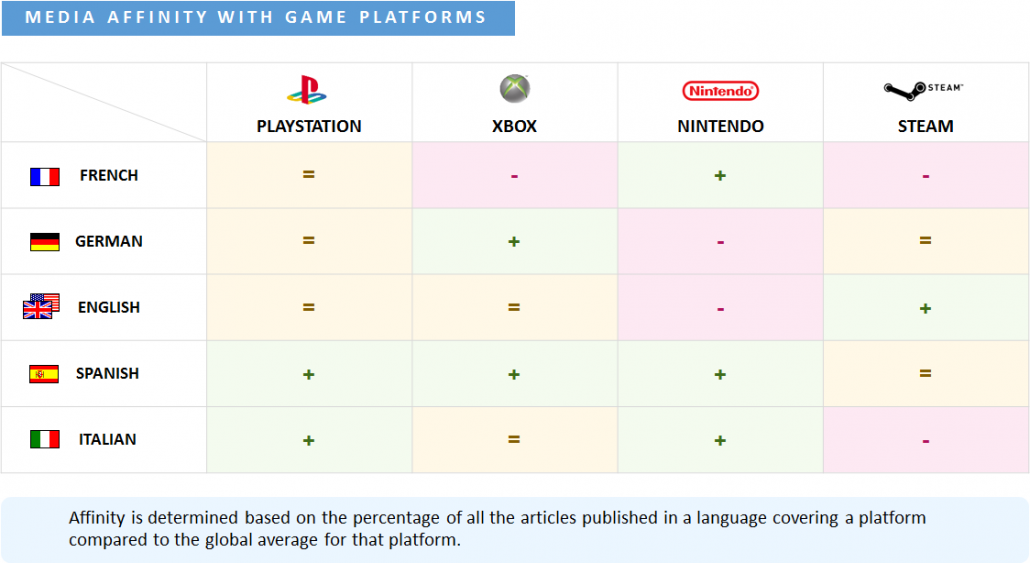 One very interesting pattern is how French, Spanish and Italian media, all based in Mediterranean countries, have a stronger affinity to Nintendo platforms compared to websites in German or English.

This is not to be interpreted, for instance, French websites having more coverage on the Nintendo consoles than on the Xbox ones. But in proportion, French media are writing more articles on Nintendo than the German media. I think this is an important consideration – as this helps understand the different sensibilities of the different cultures when it comes to games platforms.

Here is another very telling example. Below are the top 10 games in terms of media coverage in English and in German, for the calendar year 2015, set at the same scale. 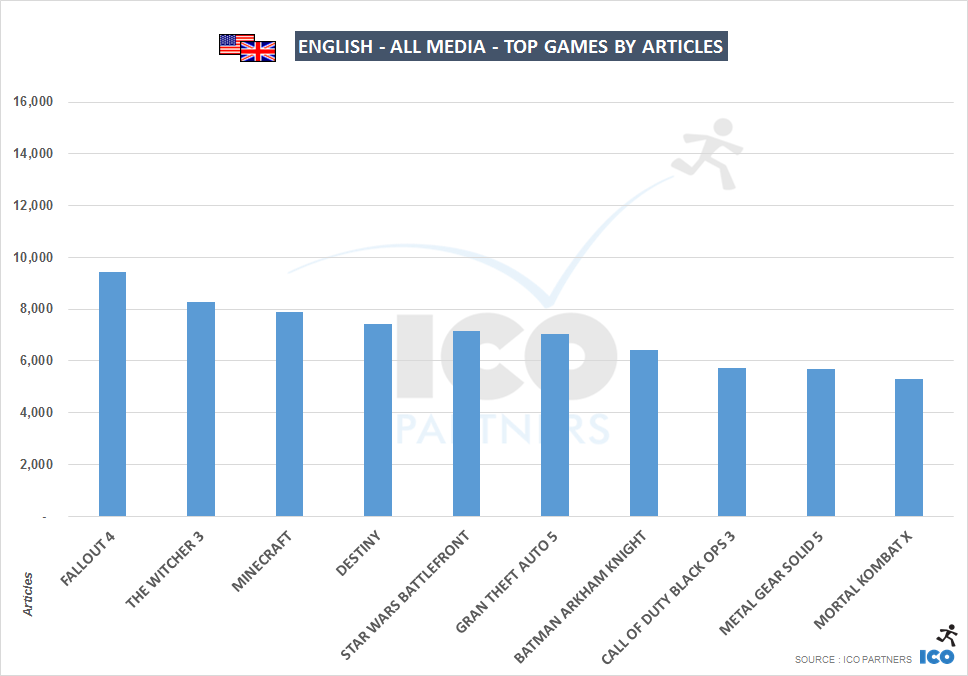 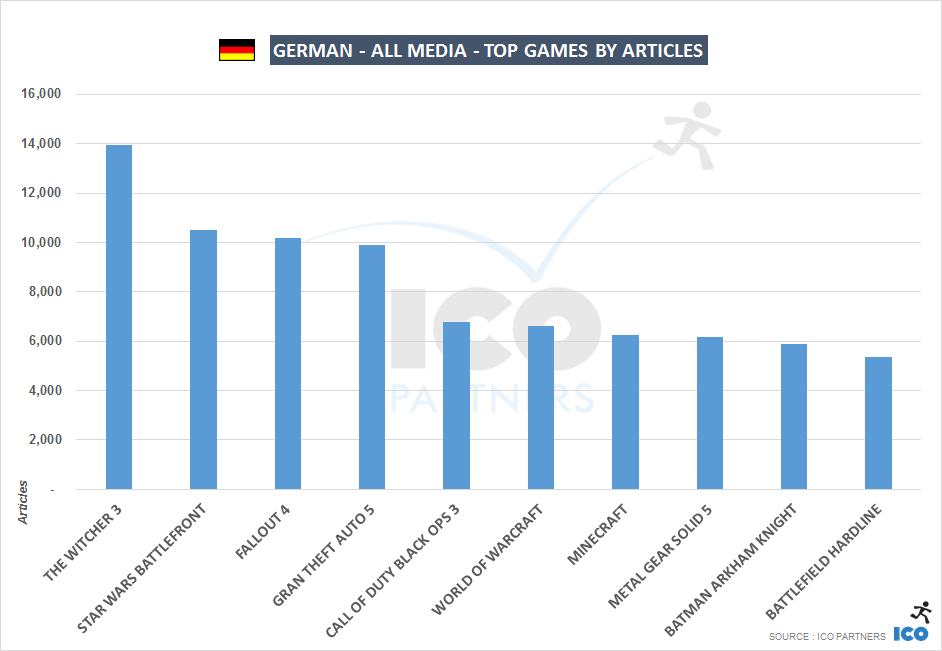 We discussed in the past how The Witcher 3 was the most mentioned game of 2015, across all the languages we track. But in English it only came second, behind Fallout 4. In German, The Witcher 3 is the clear winner with a third more coverage than the second best game… Star Wars Battlefront!

Another interesting takeaway is the very strong media coverage in German for World of Warcraft. The game doesn’t make it to the top 10 in any other language. World of Warcraft had more articles in German than Metal Gear Solid 5 had in English.

We made the landscape report free to anyone, you just need to enter your email and ask for a download link. We wanted this report to serve as a foundation for other reports we are writing, and making it free allows us to use it as a reference points across different things we are building.

Table of Contents
Scroll to top