The dust has settled on E3 2019, and it’s time for me to grab my Excel and run the coverage numbers from this year’s show.

Those of you who have been following my annual reports for some time and may be looking to make comparisons between this year’s data and historical analysis and should note that we’ve redesigned our tool set to gather data from more sources. It makes the 2019 report the most comprehensive to date but does skew the extent of the coverage in 2019 vs 2018 to look more positive.

This year’s E3 will be one to remember, not only because of what was shown (the very first announcement of Xbox Scarlett; Keanu Reeve’s breathtaking appearance), but also what wasn’t shown, most notably Sony’s decision to skip the event altogether.

In spite of this break in tradition, Sony’s absence hasn’t reduced the amount of  PlayStation games being talked about , but does set an interesting precedent with significant potential to impact future videogaming events.

The coverage is indexed around the brand achieving the largest volume of articles each year. 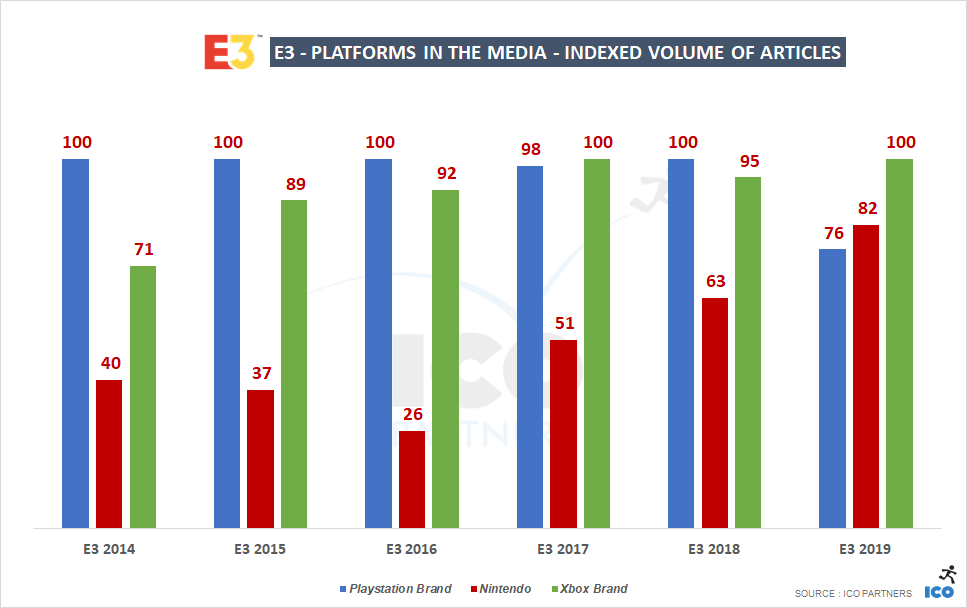 Here’s my take away from these numbers: 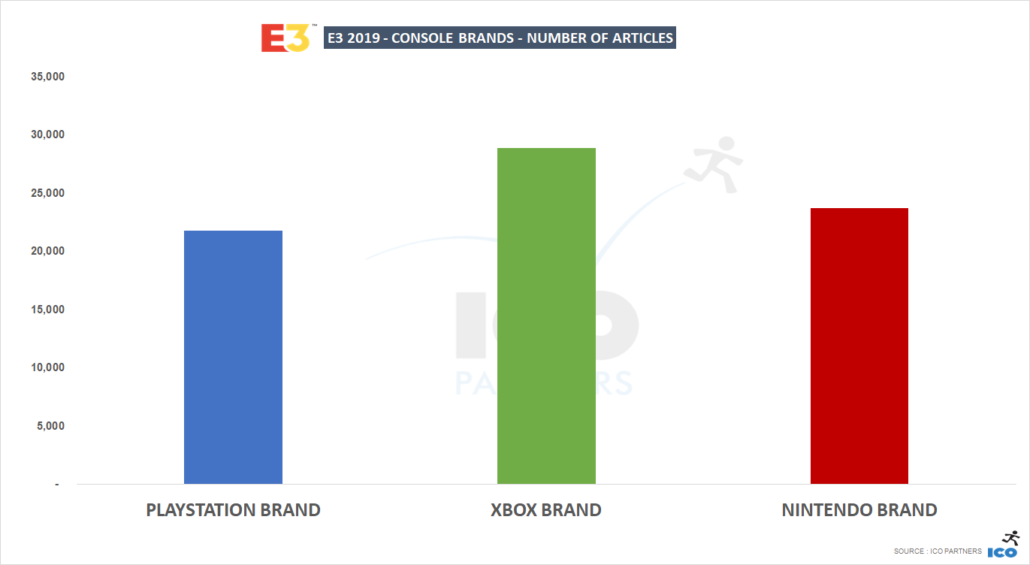 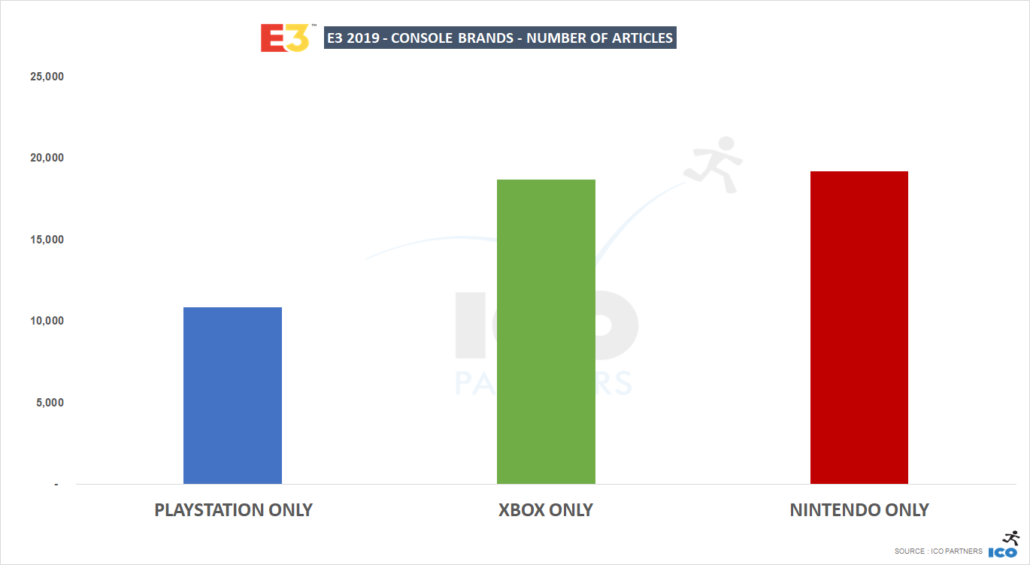 Looking article volume with only a single platform  mention highlights well how PlayStation managed to stay present while absent. The vast majority of articles mentioning PlayStation also mention at least one of its competitors. 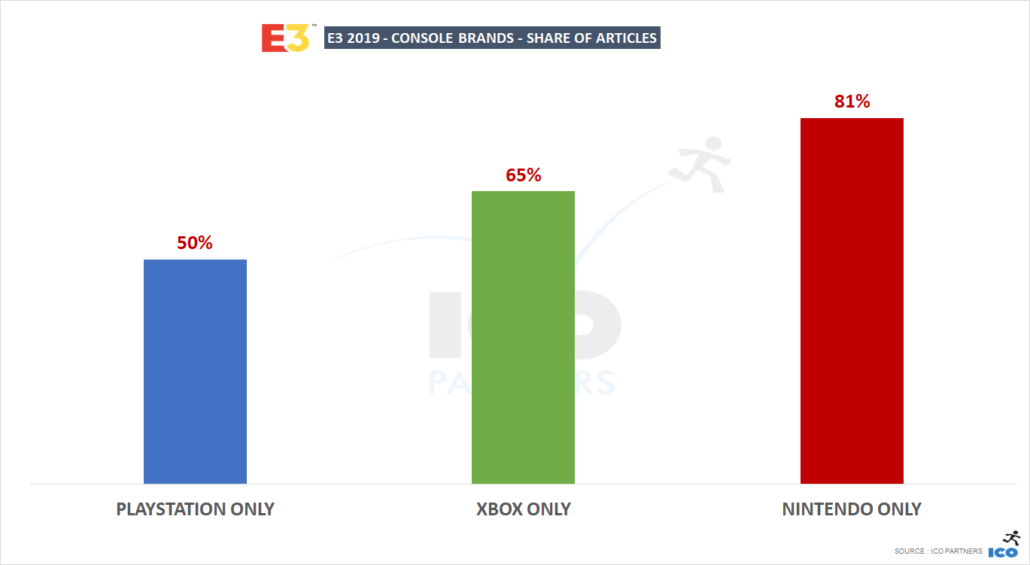 Nintendo did well in achieving coverage where it was referred to as a platform in isolation, without mention of Xbox or Sony. 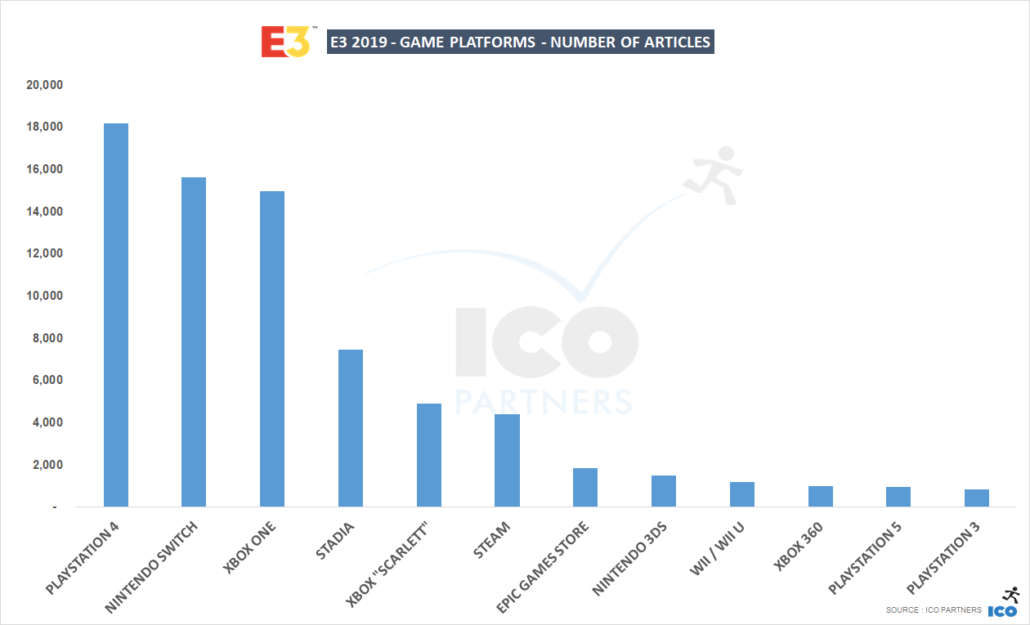 Looking solely at platforms coverage highlights the level of the PlayStation strength. Of all the platforms, with no official press event, PlayStation 4 still leads as the most mentioned console in all articles from E3 week. 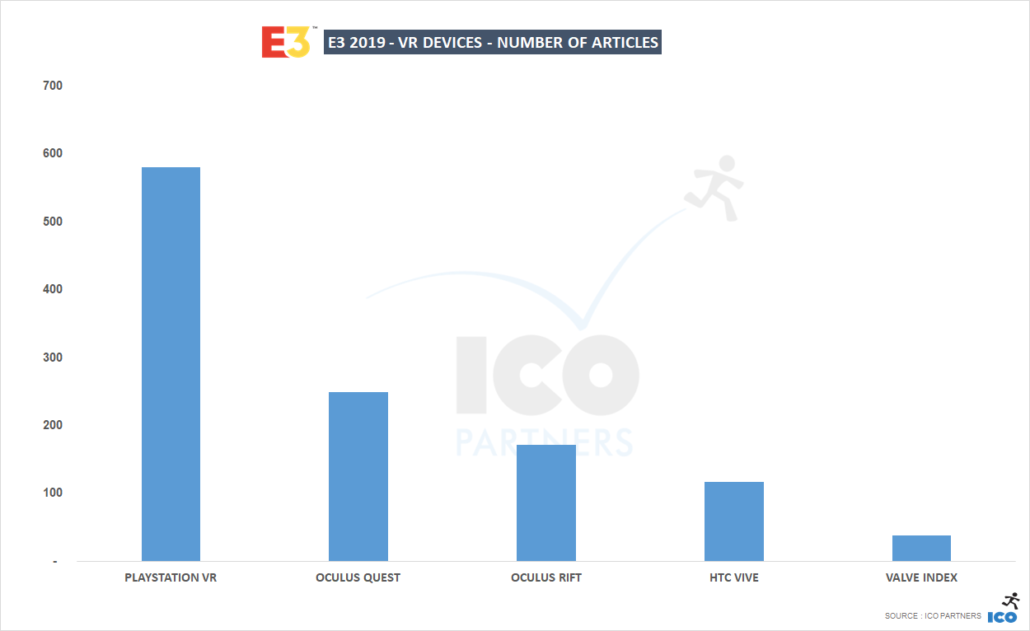 VR didn’t have a strong presence at this year’s E3 however here are some interesting observations relating to its coverage:

Our tool change makes a definitive on the drop in VR news at E3 challenging to establish however the data and anecdotal feedback from the show would suggest a big drop in VR news in 2019.

In total, there were 2,439 articles during that week that mentioned VR or VR devices. The interest is still there, but there was a significant lack of VR-specific announcements compared to previous years. 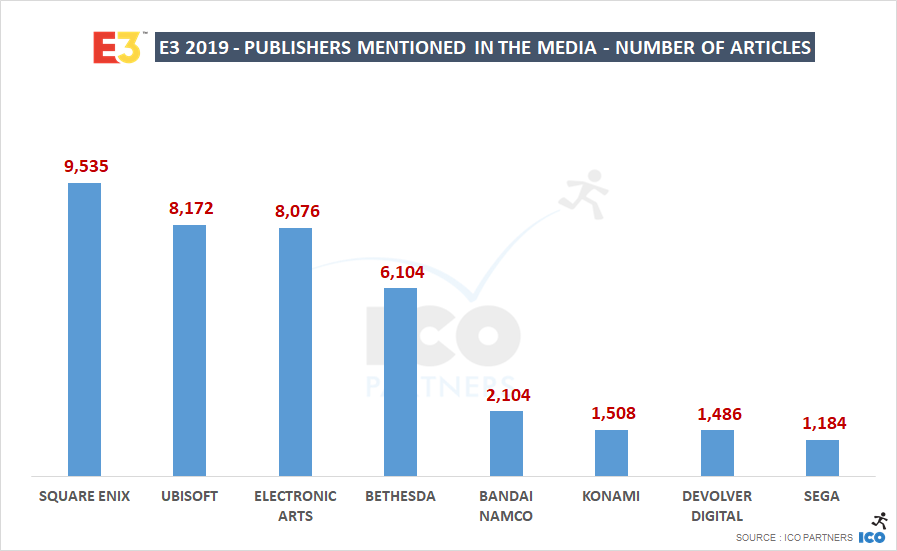 Unsurprisingly, the publishers that hosted a press conference are ahead of the ones that didn’t. However Square Enix taking such a strong lead is unexpected.

This is the first time since I have been tracking the media coverage of E3 that it has happened.

Another performance of note is Devolver Digital showing up in the chart, ahead of Sega and Activision (not shown here) and almost at the same level as Konami. Devolver is hosting its own event, but in the past, it didn’t get them to get that volume of coverage in the past. 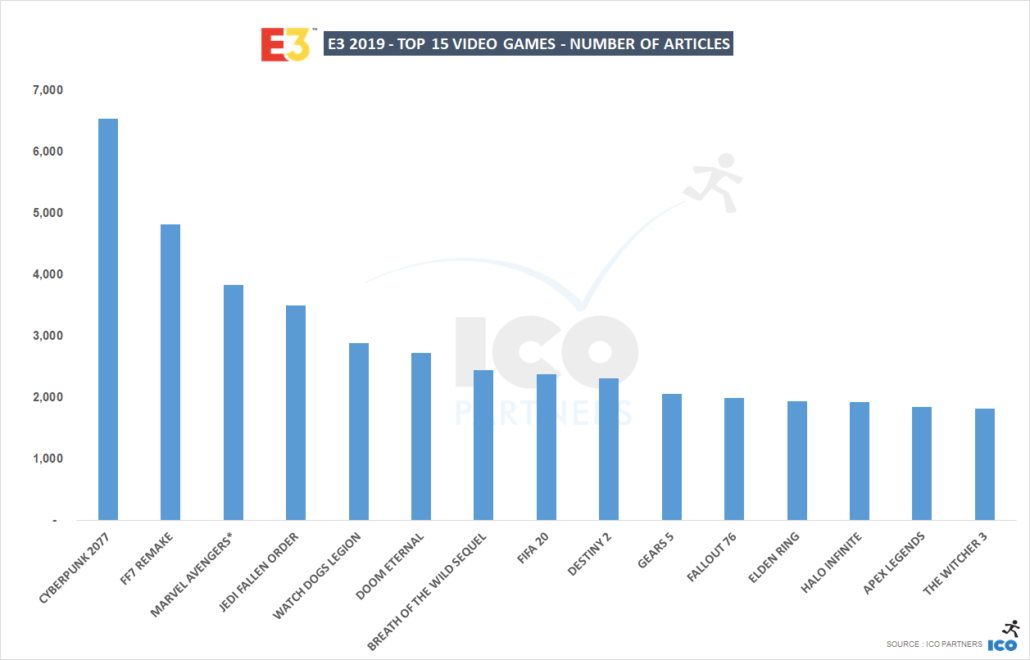 Here is my view on the top games in the media: 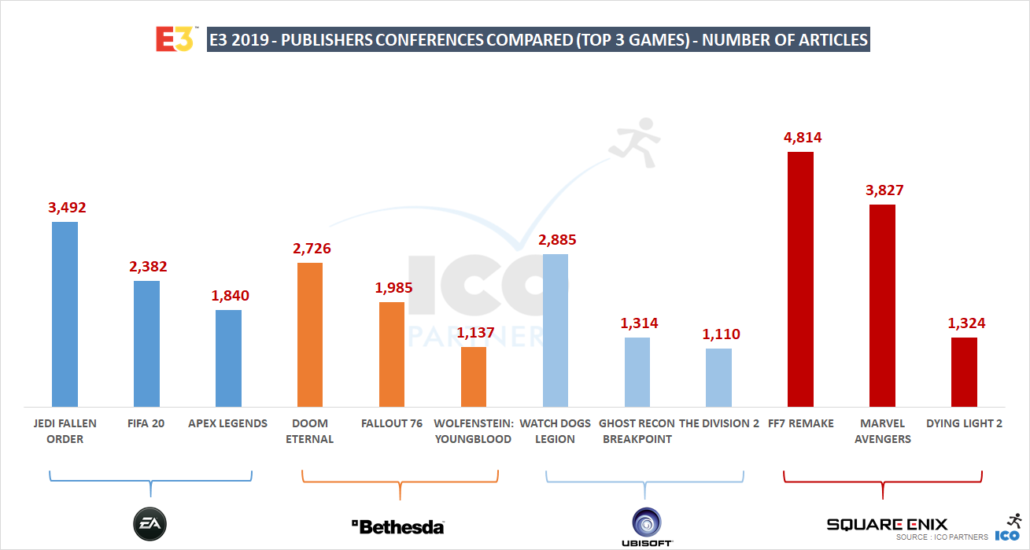 This chart breaks down the performance of individual games with the specific publisher conferences and highlights how Square Enix got the top spot.

Last week, Niko Partners’ Daniel Ahmad did a series of very interesting tweets that complement the numbers above. They show the performance on Youtube of the main games showed at E3. I highly recommend having a look at the thread:

This is based on youtube videos views for games shown at E3 2019.
Includes promoted/ad views. pic.twitter.com/7U53HcMTqK

The variation in the ranking between media coverage and Youtube views can come from a difference in interest between media and Youtube audiences, but it is also important to note that marketing spend might influence Youtube videos, increasing viewer volumes over those that are purely organic.

Lastly, I wanted to mention something odd that happened during E3.

On the 10th of June, in the heart  of the E3 media storm and the press conferences, Riot Games announced its new game, Teamfight Tactics, their own take of the AutoChess mod.

Riot is known to communicate to its own community first, but announcing its first significant game beyond League, early during the week of E3 seems unusual, even for Riot.

However, on the 13th of June,Valve announced DOTA Underlords, their take on Autochess, available right away for Battle Pass owners. While Valve’s timing is also unusual one would assume that either Riot decided to get ahead of Valve or Valve reacted to Riot.

Looking more closely at how these two announcements went: 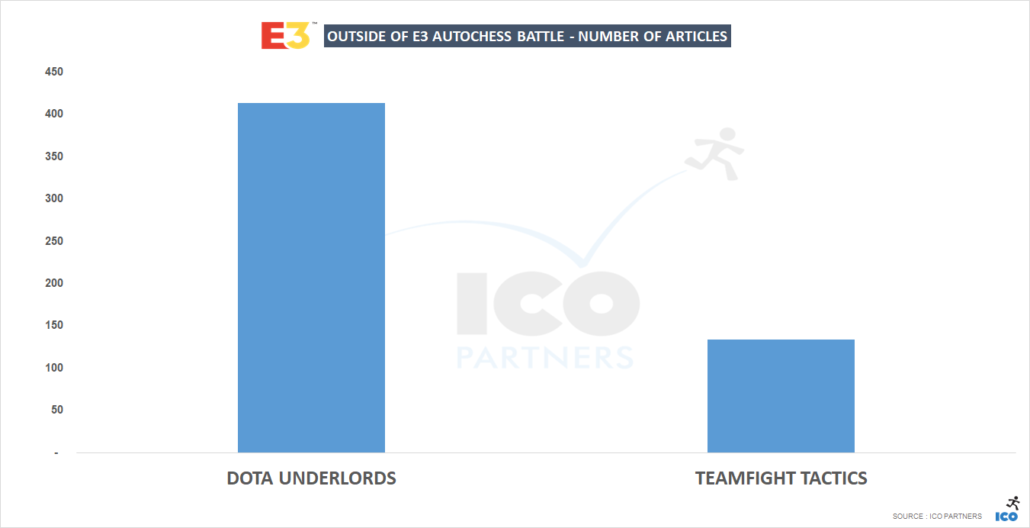 The data suggests that going first didn’t do Riot any favour. And even for Valve, this is not an impressive level of media coverage, especially during E3 when the volume of content surges and drowns anything that doesn’t have a huge momentum.

Over the years, the tool sets I was using have aged. Late last year, we decided to overhaul the technology stack we are using, to adopt more modern libraries.

This was a difficult decision to make – while the new tool is more precise, and more future-proof, it also means the data we have accumulated over the years cannot be compared with the new dataset.

The core of the methodology is the same, its fundamentals have not changed. However, we are now parsing even more websites, and we can track them in near real time.

This made it possible for me to do a first assessment of the most popular games during E3:

As a reminder, all coverage for E3 is over an eight day period, from 9-16th June with the exception of Stadia  and EA. (Both have their own events ahead of the show so the window during which they are tracked is  6-13th June and 7-14th June respectively).

The previous set of tools prompted many years of interesting discussions and insights and we look forward to being able to provide even more detail and data for years to come.