I used to check Kickstarter numbers every month. But as things were getting busy on other fronts, I settled to check on the numbers every quarter, or when I have a conference coming up where I am talking about the topic, whichever happened first. I keep an eye on projects though, but that doesn’t allow me to get a proper grasp of the trend… This 2nd Quarter of 2015 has been particularly active, with lots of big projects doing really really well (and remember, that’s even before Shenmue 3), so I was going into the spreadsheets with that in mind, and expecting a strong rebound for video games on Kickstarter. Unfortunately, I was very wrong.

A few reminders on the data collected and how it is presented:

While we are only half way through 2015, looking at the year so far is a good way to get an impression of the current trend. 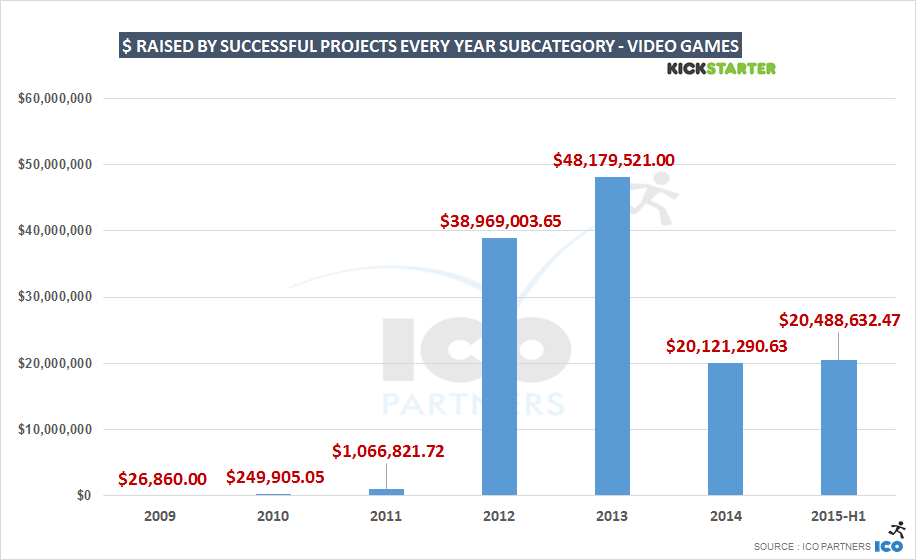 At the beginning of July, video games projects had already raised more money than the whole of 2014. And this is without two of this year’s heavy hitters, Shenmue 3 and Bard’s Tale 4, (who have raised more than $7.8m between them). However, this is not something to be celebrated. While it is nice to see that Kickstarter is still a platform where a project can gather a lot of support (2014 was a very scarce year as far as big projects were concerned), the truth is, 2015 so far is the worst year yet for “regular” projects: 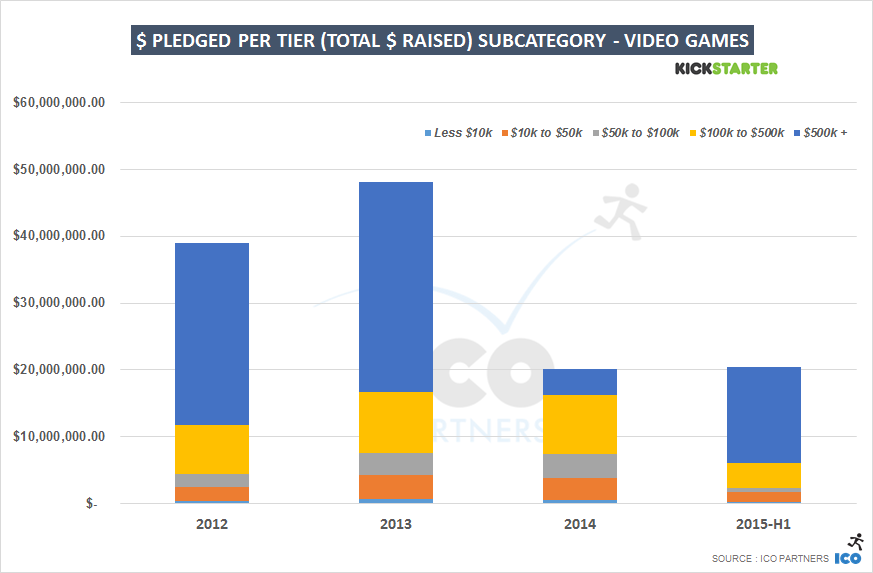 The majority of the money raised by video games was through very large projects. If the current trend continues, projects that raised less than $500,000 are on track to garner less money than in 2014.

In 2013, there was a significant correlation between large projects hitting the platform and smaller projects getting more support. The big projects were bringing more visibility to the smaller ones. This behaviour has now gone apparently.  The below graphs better illustrate the situation: 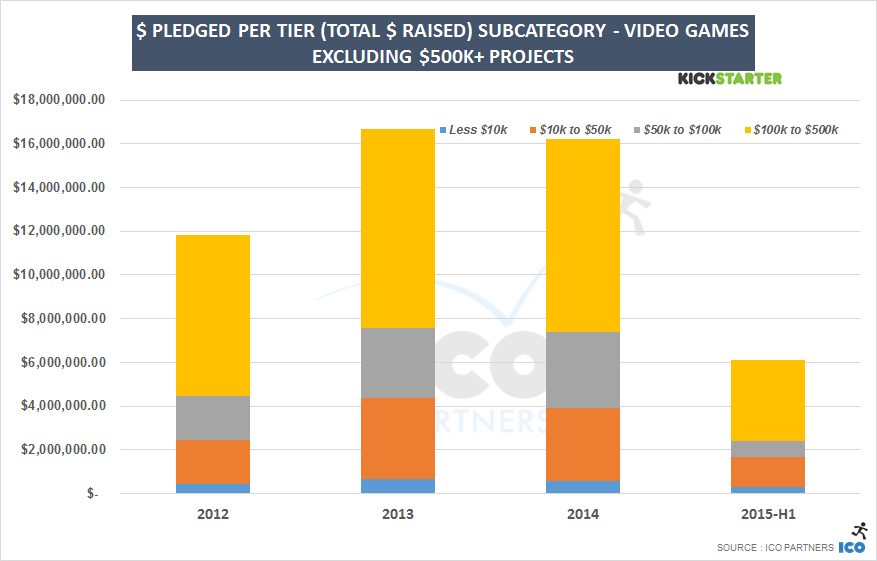 We are not talking about a few projects that should have been in that $10k-$500k bracket over performing as big hits. Looking at the raw numbers of projects involved, it is clear there is a drop in those tiers (and I doubt the rest of 2015 will be massively different): 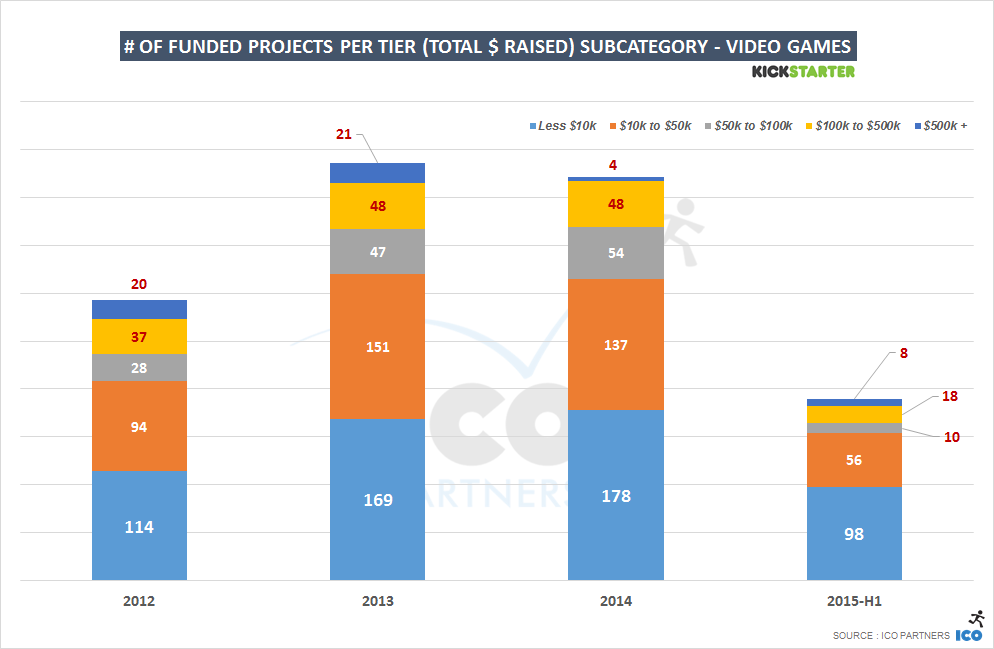 If anything, I don’t expect as many big projects for the second half of 2015.

But, wait! This isn’t the only way to look at it? Maybe there has been fewer projects overall? 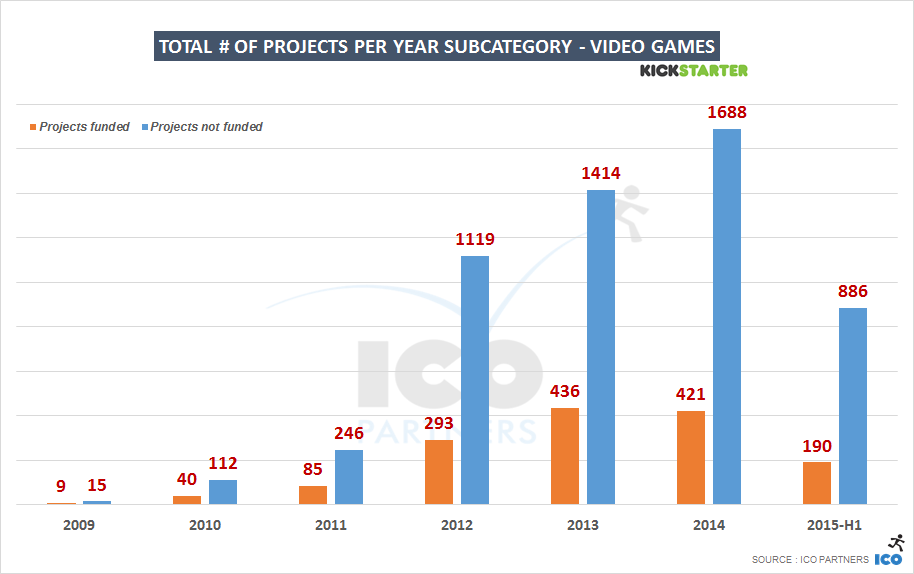 If we can imagine more projects than last year to get funded (or in the same range), it will be thanks to the steady growth of the  small projects (the ones below $10k; for those, Kickstarter is getting stronger with time I suppose). But overall, the total volume of projects submitted to the platform is growing, meaning the proportion of projects getting funded is going down.

So the “success rate” is going down? How bad is it?

To be fair, this is more a symptom of Kickstarter just getting crowded, sometimes with very low quality projects.

One way to quickly measure those low quality projects is to look at those projects that got $0 pledged to them: 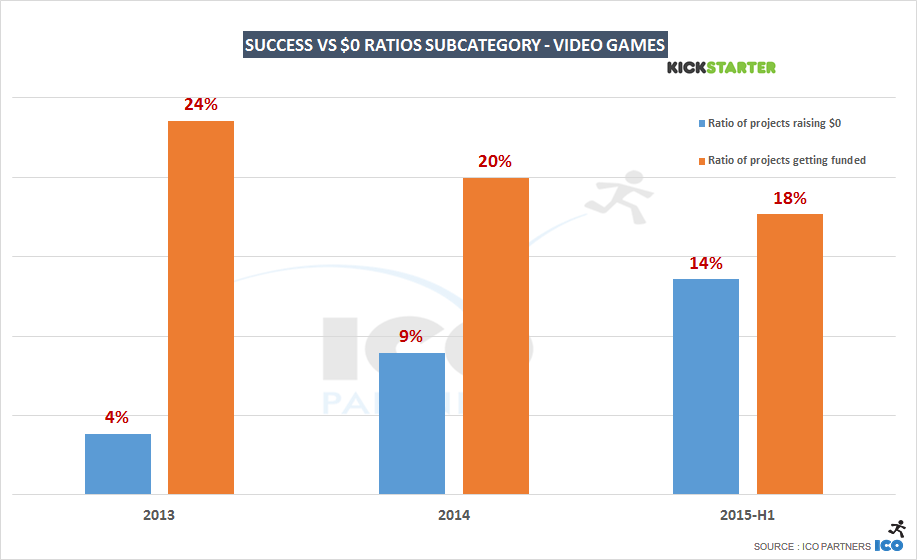 This emphasises the burden on project creators to promote their projects as the discoverability on the platform is not helped by those low quality projects.

But, Thomas, you are not accounting for the mobile games you said? Maybe it is changing the trends?

Let’s look at mobile games then. It was introduced as a new subcategory in April 2014, so please remember the numbers for that year are only partial numbers. So, how big are mobile games on Kickstarter? 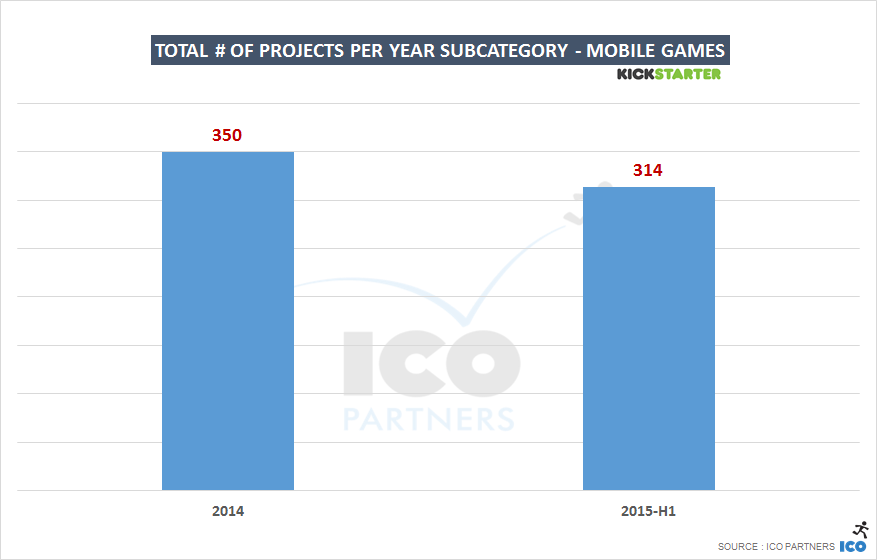 So, for every mobile game project, you have 3 video games projects. That’s actually a lot!

Sadly, they haven’t read my blog and they don’t know that Kickstarter is not a good platform to fund a mobile titles: 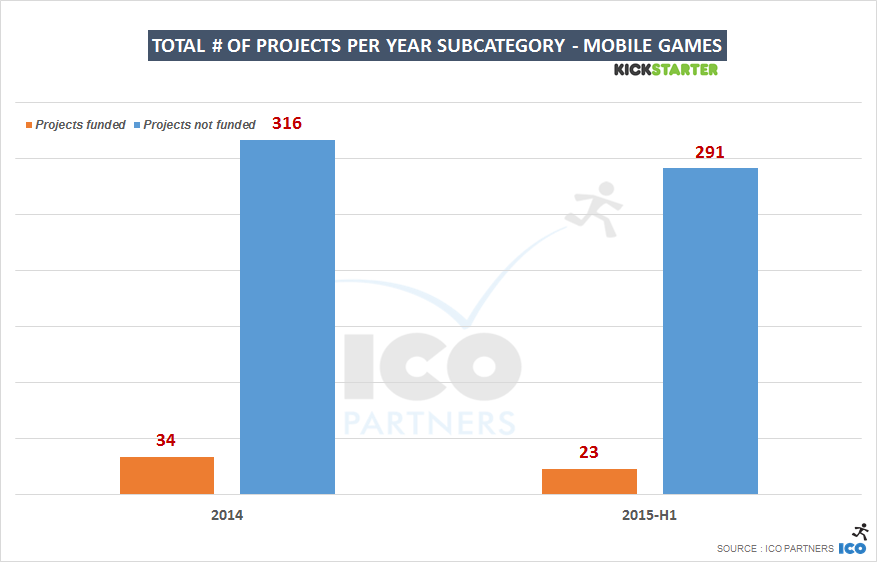 For every mobile game project that managed to get funded, 8 video games projects reach their goal. Less impressive…

And then, there is how much they raised: 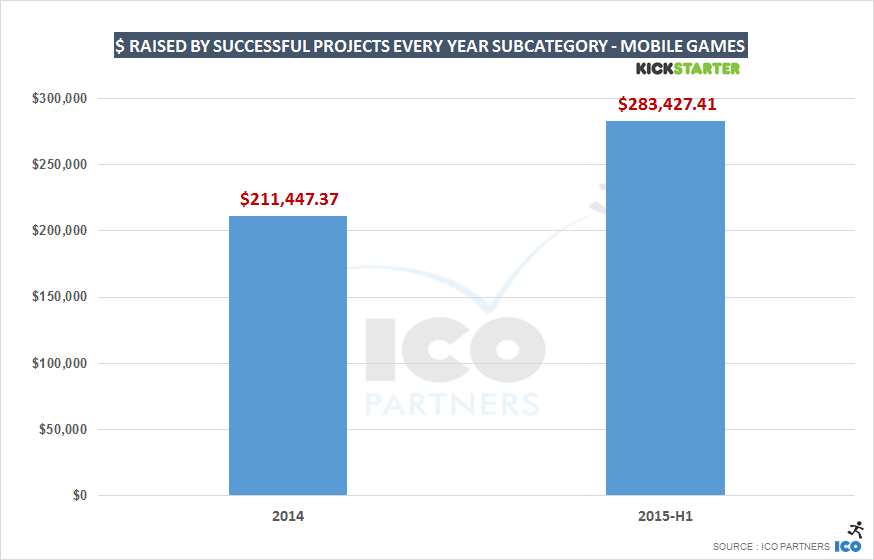 This is how the mobile game projects are doing per tier: 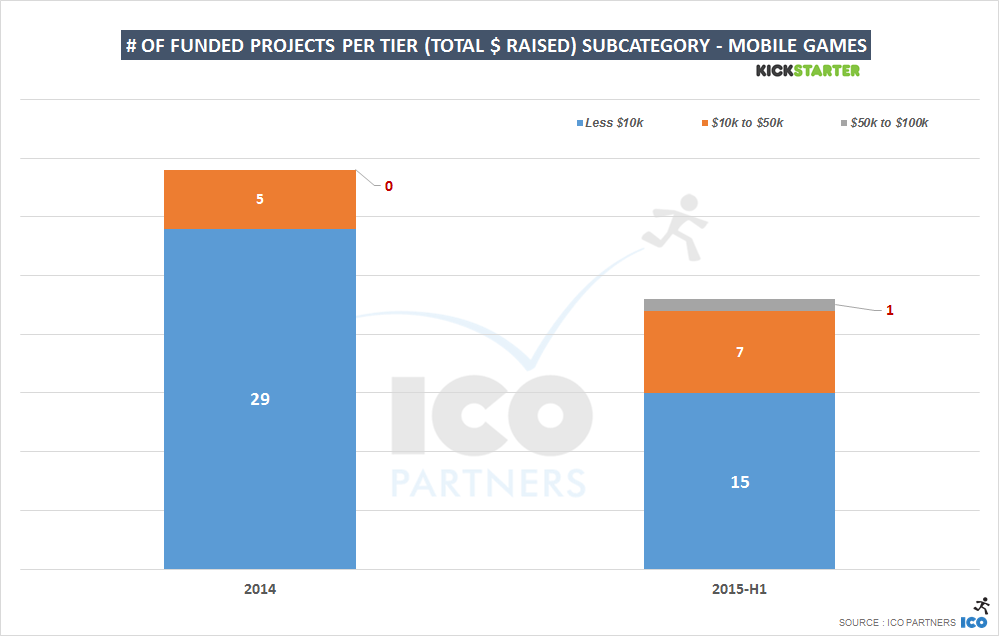 And yes, mobile projects also tend to have a much higher ratio of projects stuck at $0 pledged: 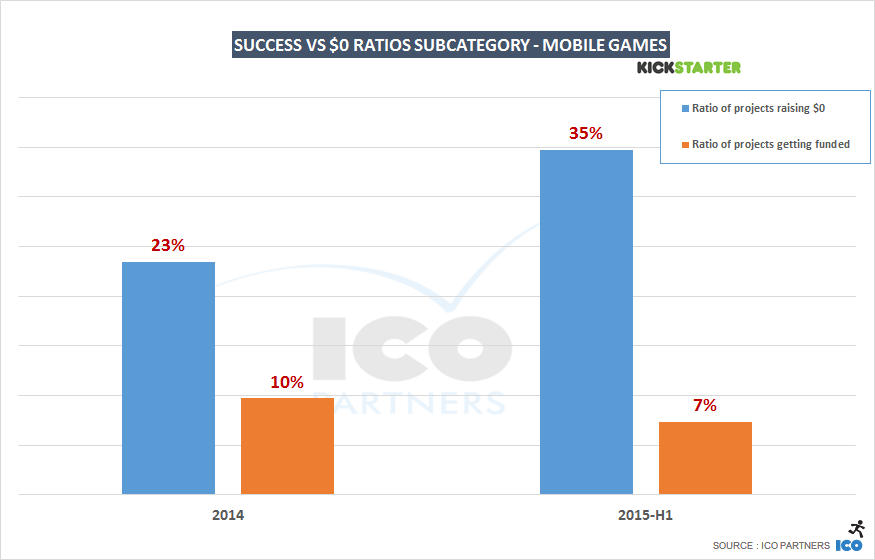 In conclusion, Mobile games are not where the secret success of video games is hiding.

Where is it going?

I wish I knew. I don’t like the trend. While Kickstarter is growing (more projects gets funded; more money is pledged) this growth is at the extremes: very small projects and very large projects. Here I was hoping that the wave of big projects would benefit projects across the board.

So, based on all of the above there are a number of thoughts I currently have:

Overall, I think this is a maturity issue. Big projects go for low hanging fruit, using their brand power, and small projects are struggling to build a proposition where they can make the audience care about them. This is a shame, there is still so much potential for crowdfunding to grow, but there is a need for better best practice to be implemented across the board. That’s also true for large projects: I can’t believe Shenmue 3 was so successful when the campaign was poorly put together and terribly mismanaged (if you want examples then feel free to seek me out at the next conference I am attending). Crowdfunding sceptics have another great case study of fans being mishandled; potential projects creators will have  wrong expectations based on that performance. The ecosystem needs a “growing up” moment, probably starting with more transparency.

I recommend reading this Polygon article on the topic too: ‘Big indie’ Kickstarters are killing actual indies