In a couple of weeks, Thomas Reisenegger from the ICO PR team will giving a talk at GDC Europe titled Everyone Can Do PR: How Small Studios Get Themselves Heard.

The talk is an evolution from the one he gave in Vienna in January, with some format changes to help the audience better understand the key takeaways.

However, one topic we have been discussing is how to add was some metrics to accompany the presentation. While there is a lot of common sense behind most of Thomas’ advice, we thought that adding some hard data was a good way to sway an audience perhaps unfamiliar with the day-to-day workings of PR but with a strong scientific predisposition (game developers, basically).

A lot of this will read as obvious to some, but now we have the data to back up these common assumptions on timing of communications.

I went into the media monitor tool, and ran some numbers. All the data below is based on one year of media tracking (from the July 1 2014 to June 30 2015), and it is based on the number of articles published by the websites we monitor. The idea is to look at what are the hotspots for the media, when they publish and when they don’t and take it into account in your PR strategy.

Days of the week

Journalists tend to work mostly during week days, from 9 to 5. Making an announcement during the weekend makes it less likely to be picked up. In the same spirit, publishing late on Friday will likely push your news to the other side of the weekend, or possibly cause it to miss the news cycle altogether. 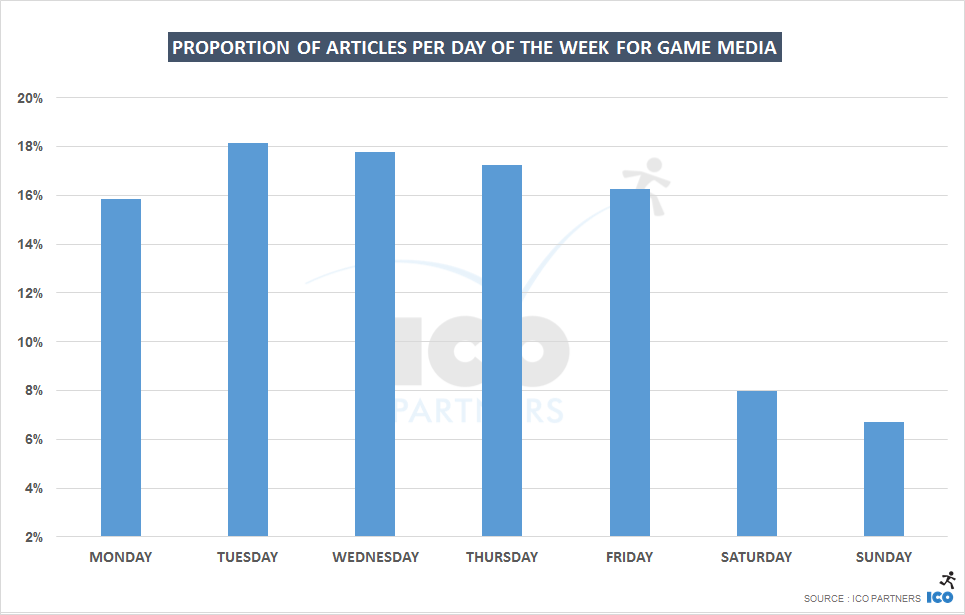 Beyond Saturday and Sunday, Monday is the 3rd slowest day in terms of volume of publications. As people come back from the weekend, it may take a while to go through events from the weekend and get back on the rhythm.

For reference, I have compared Games media to Tech and General Interest media: 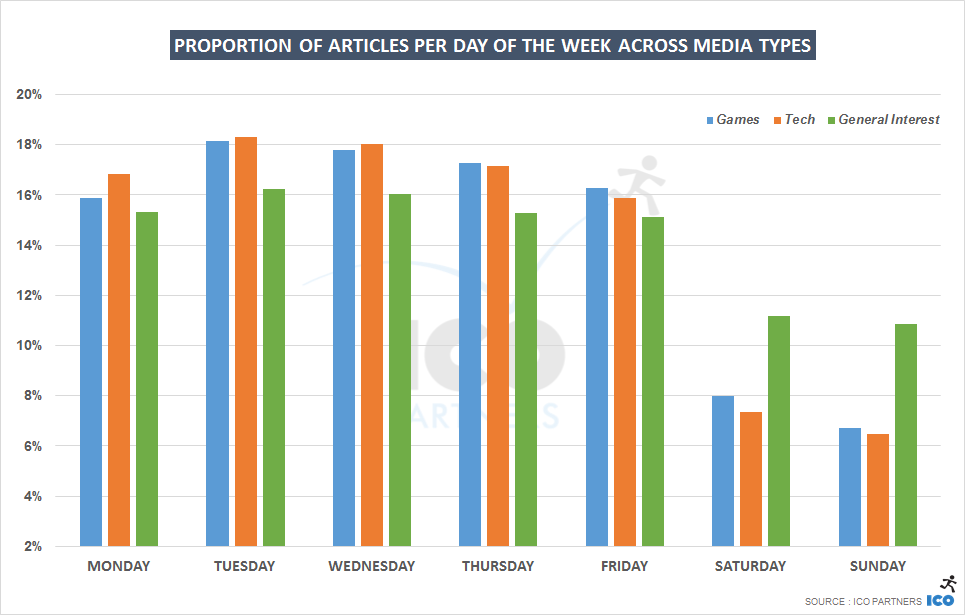 Monday as a “slow” day is true across the board. General Media (newspapers, magazine outlets) tend to have more activity over the weekend, as could be expected from a media type that covers news on a 24/7 basis.

It is interesting to note that they are also variations across languages. These first two graphs are across all languages, and I looked at language specific trends: 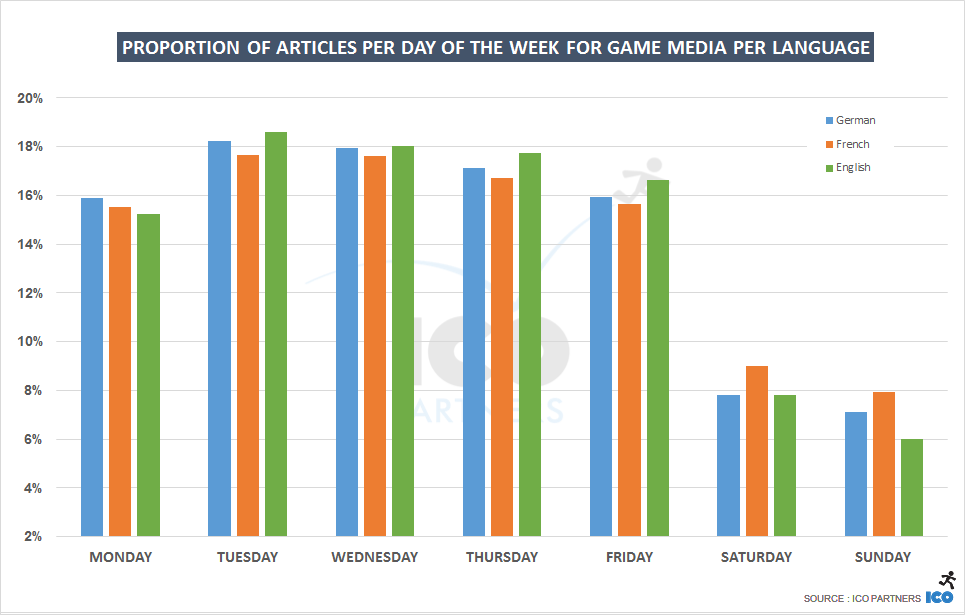 The concentration of media publications during the work week is actually more pronounced in the English language outlets than the French and the German ones. If anything, French websites are the most likely of the language groups to publish over the weekend (not what I would have expected).

I have talked in the past about the volume of media coverage at certain time of the year, but that was mostly in the context of specific games. This is the opportunity to look at overall volume of articles, month-on-month. 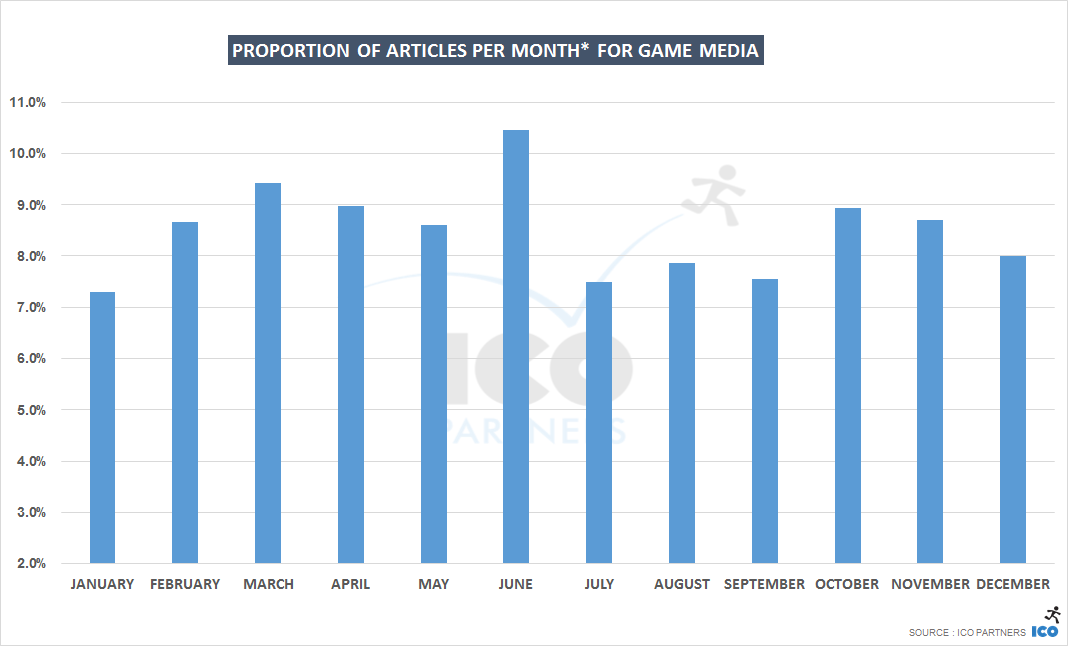 Clearly standing out is the month of June, thanks to the great media coverage of E3, it is the one month during the year that sees the most output from game-related outlets. Getting media attention during E3 is difficult, but that’s also true for the week before and the week after.

March is also a busy month. As the last month in the financial year for many companies, it sees a number important games releases. GDC San Francisco is also probably contributing in the extra media coverage.

January is a slow month, and probably the time of the year where it is a bit easier to pitch a game to the media that may be a struggle otherwise.

July/August are also slow, but it might be more due to holidays (and fewer editors available to maintain the output). Gamescom is probably helping in August. It’s particularly apparent when comparing other media types: 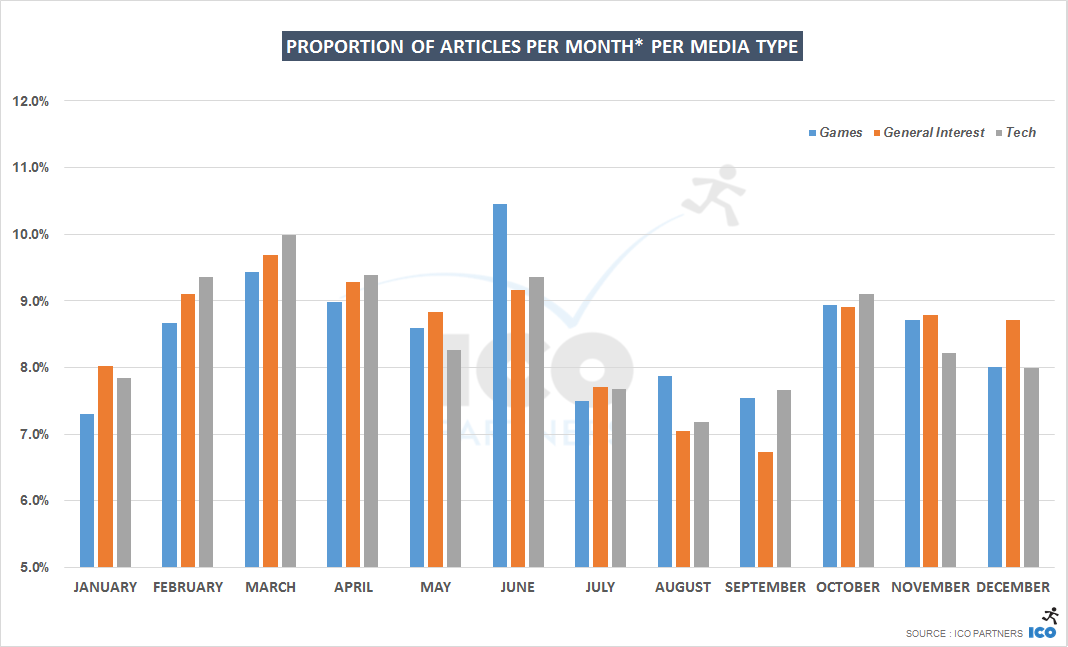 I might do a follow-up purely to discuss October/November, but suffice to say, that while it sees a lot of media coverage, it is highly concentrated on a few AAA games.

The process to do this for each month would be too time consuming for now, but to give an example, I went and look at the weight of the top 10 most mentioned games across all the articles published by video game media, and it is scary, almost an article out of 4 is about a game in that top 10: 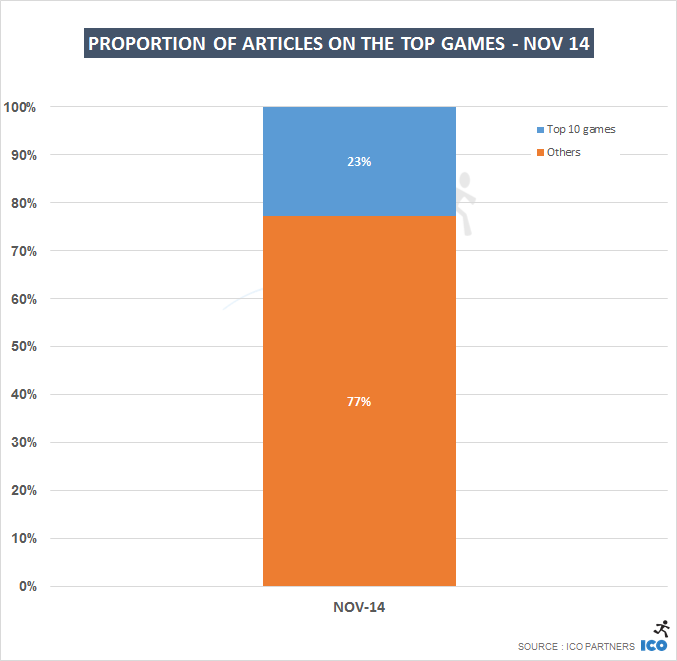 There are also local specificities that are interesting to consider. Here are a few chosen examples: 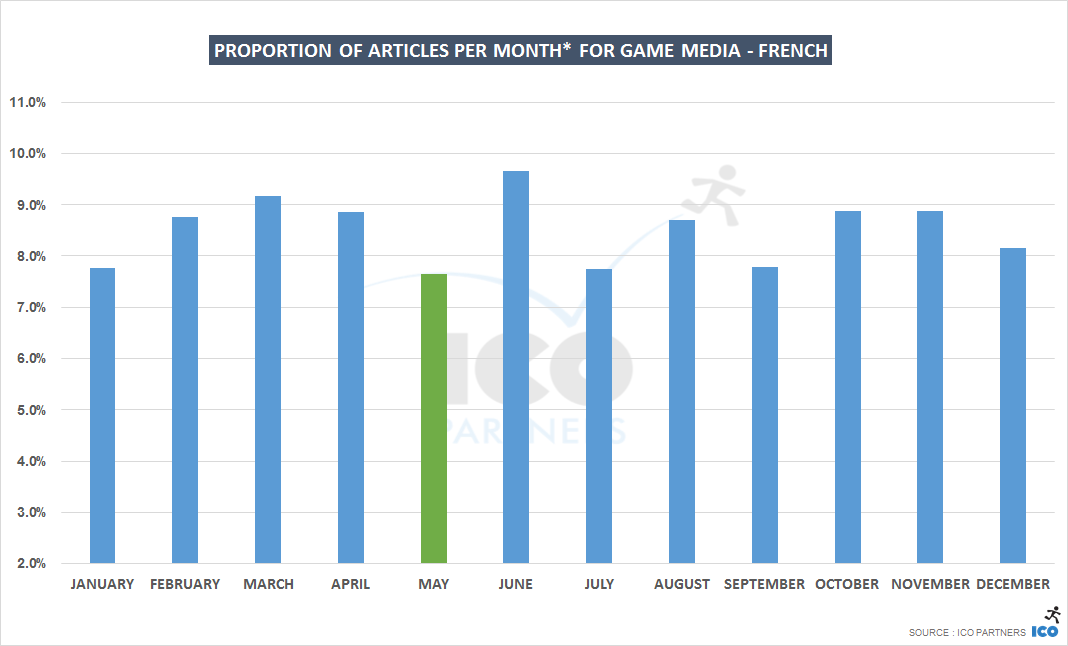 May in France is a slow month. There are a lot of bank holidays, and many people take a few extra holidays to maximise their time off. 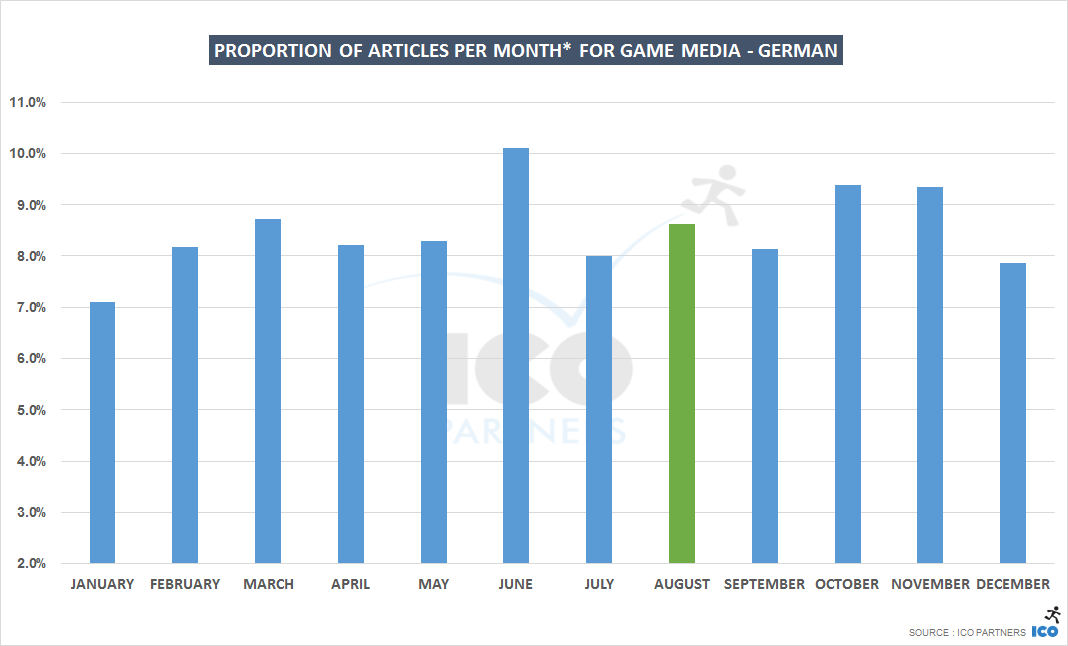 The German media output is very steady. Steadier than any other languages. The summer months are not incredibly lower than the others. And it is worth noting that gamescom, being a local event, is probably having a significant impact on the August numbers. 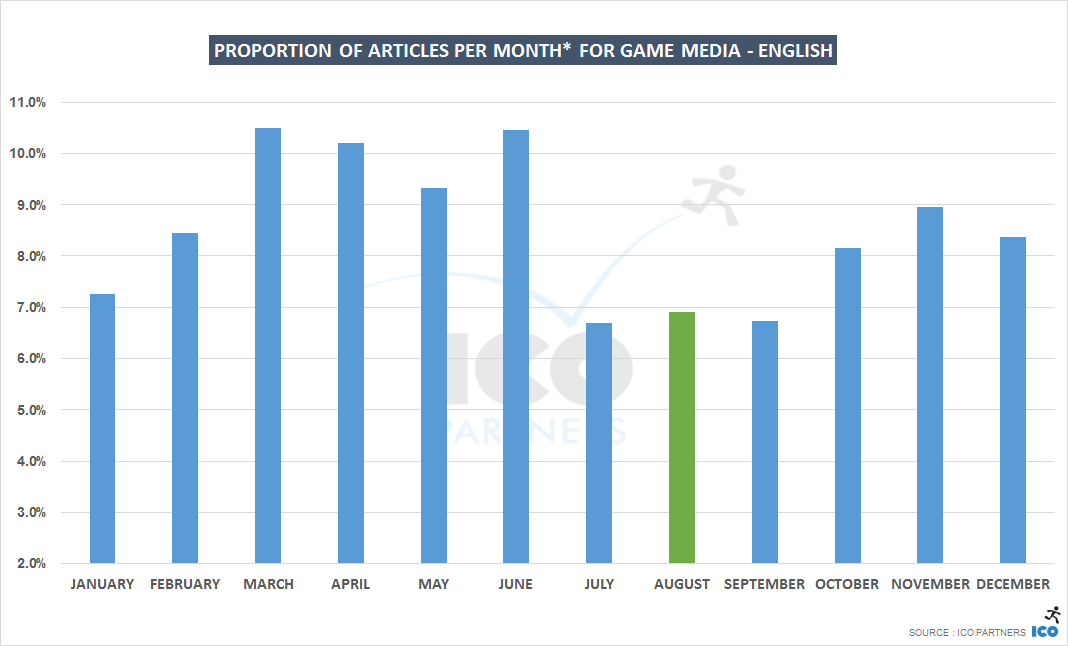 At the other end of the spectrum, English-language media has a significant drop in the summer, bigger than the one seen across all languages, and gamescom only helps a bit.

This discrepancy between the 3 languages is even more striking looking at the Quarterly data: 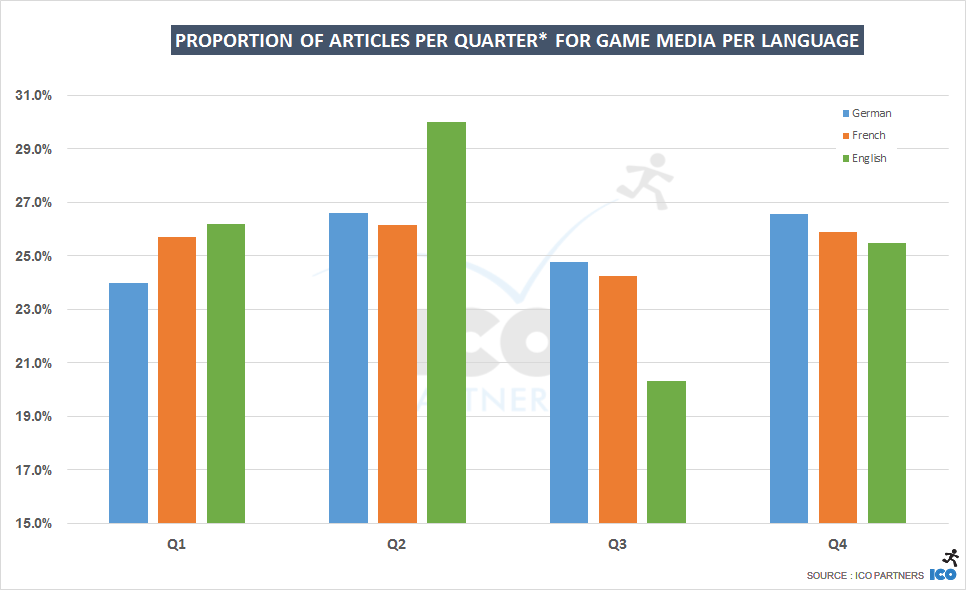 It shows the relative importance of E3 and gamescom for the 3 different languages.

Don’t announce over the weekend or late on Fridays.

Avoid making key announcements in October or November; around E3 in June; and you probably want to stay away from the summer holidays too.

Do go to Thomas’ talk if you are at GDC Europe. 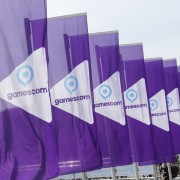 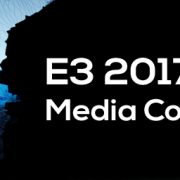 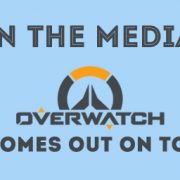 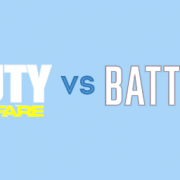 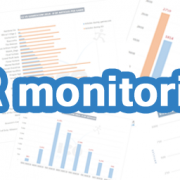 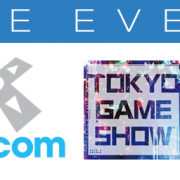 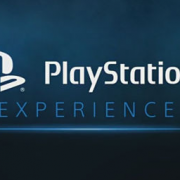 The giants hiding a growing problem – Video games on Kickstarter on the...
Scroll to top
We use cookies to ensure that we give you the best experience on our website. If you continue to use this site we will assume that you are happy with it.Ok